A 3-year quest ends with a gnarly nontypical whitetail deer 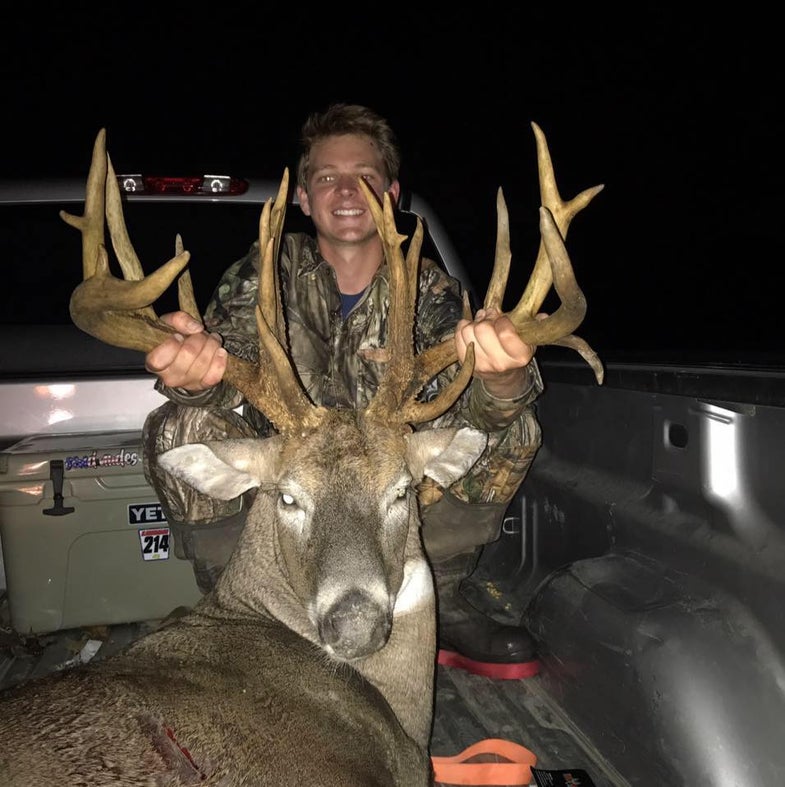 Ohio hunter Luke Lohan displayed tenacity beyond his age this fall. The results? A gagger of an Ohio whitetail.

Lohan, 19, captured images of a solid buck three years ago and, while he had not yet filled his Ohio buck tag, it was the kind of deer that made him pass up several good bucks in hopes that he’d have an encounter with the deer. It didn’t happen. The following season, the buck was back, but he wasn’t exactly a regular visitor to Lohan’s camera locations. And he and wasn’t exactly photogenic when he did appear.

“I did get some pictures of him last year,” Lohan says. “But nothing regular. There wasn’t any pattern, and I never really got any good pictures. He’d be way in the background or it’d be rainy or foggy. Or he would come in right at that time of day when the camera wouldn’t flash and it would be too dark to really see him. At that point, I decided I wasn’t going to hold out for him because there really wasn’t any pattern to count on and I didn’t really know what he was.”

That changed this spring. Lohan placed his cameras in his Belmont County hunting area in May and began gathering photos of bucks that were just starting to develop their antlers. Several seemed to have potential. A few months later, that potential became something much more concrete.

“I was getting 30-40 pictures of the buck every day. He was running scrapes really early—like in the middle of August. I knew where the deer was bedding, feeding, watering. He was coming to my feeder a lot. I really felt like I had him figured out,” Lohan says.

But then, as big bucks often do, the deer just disappeared. From September through early October, Lohan didn’t capture a single trail camera image of the buck. Finally, on October 6, the buck was back. “I got pictures of him that Friday morning, the Saturday night just after dark. Then on Monday morning. I had gotten rained out at work so I decided to hunt all day,” Lohan says.

After hunting through the early afternoon, Lohan headed in to grab something to eat. He was back in a different stand by 4 p.m. After settling in, he decided to do some light rattling. And that was all it took.

“He came in pretty hot. I was looking at the deer and thought ‘That’s a pretty good buck…then I was like, oh, I know exactly what deer that is,'” Lohan says. “I really wasn’t that nervous. My heart was beating pretty good but I wasn’t that psyched out. When I shot him, it was a perfect shot. Once I stood up after he ran off, that’s when it hit me. I about fell down.”

Lohan felt confident in the hit but hadn’t seen or heard the deer fall. So he opted to slip out of the stand, head back home, and wait a bit before tracking. “When I looked at the spot where I’d shot him, there was blood everywhere,” Lohan says. “It didn’t take very long to find him.”

What’s it like to walk up on a buck that may well top 200 inches? “It’s honestly an indescribable feeling. To put your hands on something that you’ve been waiting years for. To grab it in your hands….it’s just impossible to describe.”