When the seas get rough in paradise, test your back, shoulder, and arms on hard-hitting scissor jaws 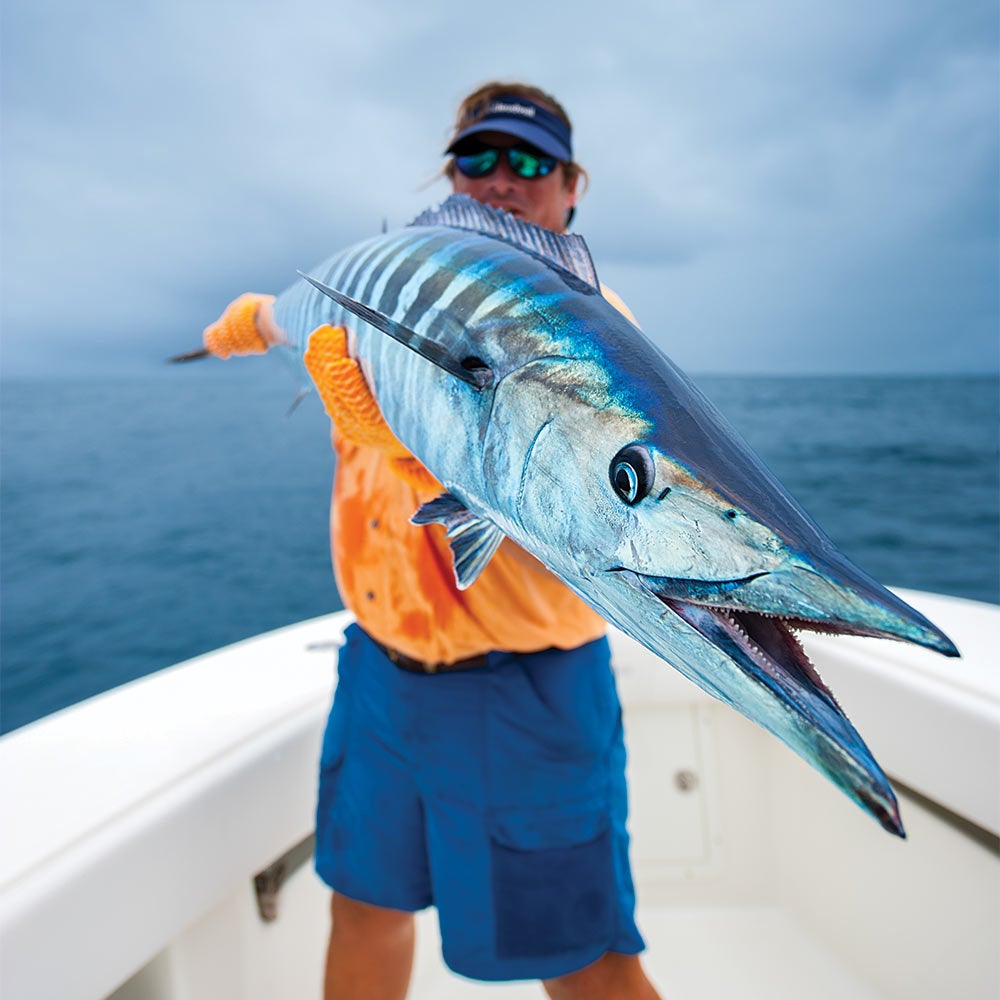 Long-sleeve shirts, hoodies, and foul-weather gear in the Florida Keys? The attire may seem out of place, but it’s not all easy breezes, calm seas, and sunny skies in paradises like Key West and the Bahamas come winter. Frequent fronts often make the postcardlike conditions in these locations disappear. So why visit when strong sea legs are a requirement? Because any Southern captain will tell you that wahoo go on a feeding tear during the less-than-ideal winter conditions that aren’t for the average tourist. This is your best chance at scoring both numbers of and trophy-caliber wahoo. If you and your hardcore group of buddies are looking for a winter getaway that will end in sore arms and some of the finest sashimi you’ll ever eat, these three top captains will show you the way to trophy ‘hoos.

Location: Key West, Florida
According to Weinhofer, winter wahoo success in Key West revolves around identifying optimal conditions and picking your battles. “I’m running on that first day when the wind drops out after several days of a strong blow,” he says. “When it’s been rough, the bait settles in on wrecks. I talk to divers, and they’ll see pods of 20 to 30 wahoo hanging in packs on those wrecks right after a front. And they’re usually all big, in the 30- to 50-pound range.”

Weinhofer trolls the contour lines around wrecks in an east-to-west pattern, and once he gets hit, he sets all his lures to run within 10 feet of the one that got knocked down. Most of the time, Weinhofer is pulling Rapala X-Rap Magnums in sizes 20 through 40. UV Sailfish is one of his top-producing colors, though as a general rule, he says, dark colors are key on dark days, while bright colors work better when the winter sun is shining.

Location: Venice, Louisiana
In the Gulf of Mexico, finding winter wahoo can be as easy as finding an offshore oil rig. Hundreds of the latter dot the horizon off Venice, Louisiana, and Beach will start trolling around rigs as close as 4 miles off to as distant as 50. Where he stops depends on where he finds the bait. First and foremost, what he wants to see are hardtails, bonita, or blue runners breaking the surface around a rig. That lets him know he’s in the zone. If there’s a color break around the rig, he knows he’s in the money.

“If I see dirty water on the surface on one side of the rig but blue water kicking up on the back side of the rig, I’m working that color break,” Beach says. “Most of the time, lures get the bite going, but if the chew is slow, we’ll deploy live bait, like blue runners.”

Beach pierces his live baits through the nostrils with a 6/0 J hook, adding a 3X stinger treble right behind the dorsal fin. It’s all connected with seven-strand wire to battle not only wahoo teeth, but also the inevitable shark teeth that will cut those baits when you’re slow-trolling. “You’ll burn through a lot of tackle because of the sharks,” Beach says. “But you’ll often be rewarded with a 100-plus-pound wahoo when you’re dragging live bait.”

Location: North Miami Beach, Florida
Schatman is a legend in the South Florida offshore scene. He’s credited with pioneering many of the high-speed trolling techniques used for wahoo the world over. He’s also put them in practice for more than 10,000 hours in the waters of South Florida and the Bahamas. During the winter, the Bahamas experience a wahoo migration, and according to Schatman, strong flood tides make them move.

“We get plenty of small to medium wahoo on the west edge of the Abaco Islands, but the real big ones, weighing 80 to 150 pounds, come up from Africa and hug the east side of the Bahamian archipelago,” Schatman says. “During one of our best bites, we landed 122 wahoo in three days on the east side of the islands.”

Schatman leans on giant 50-wide reels and will drop lures like Tuna Darts and Sea Witches rigged with ballyhoo as far as 250 feet behind the boat. On overcast days, Schatman says, no lure combo gets bit faster than pink-and-yellow. He also says not to troll in a zigzag pattern, as many captains do. He scores more bites running straight along depth changes in the 200- to 500-foot range.