These killer tactics will improve your odds on opening day of dove season, and in the weeks to come 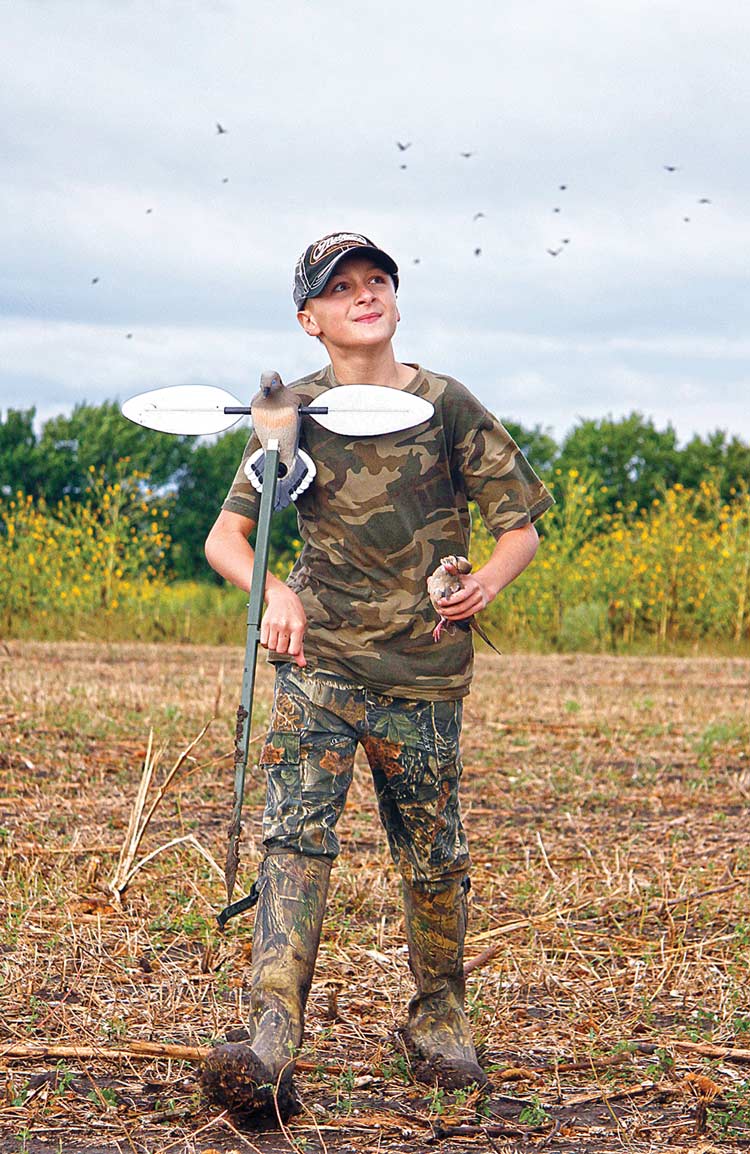 For many hunters, dove season marks the unofficial beginning of fall. Throngs of shotgunners spend all spring and summer daydreaming of days in dove fields where the birds are as thick as bees around a shaken hive.

Too often, dove hunts end up as sweaty hours spent sitting and staring into an empty sky.

But if you follow these tips, you could end up with a shotgun barrel that’s even hotter than the weather, and for more than just opening day.

Scouting is even more important for dove hunters than it is for deer hunters—whitetails don’t migrate. Start looking for birds a few days before opening day and don’t stop until the season ends. There are several factors to bear in mind while scouting.

A cold, wet-weather stretch back in the spring could mean that a field normally planted with sunflowers ends up being sown with soybeans. That’s great for deer and deer hunters, but it is about as appealing to doves as a plate of tofu at turkey camp.

It may sound obvious, but doves need food, water, and shelter at night. Dove hunts will always be best done around the one of these that’s least available in your area. It’s what concentrates the birds.

Keep your eyes on the skies because where there’s smoke, there may be the best dove hunting of the season. The bare and blackened soil of a wheat field that was burned just before the farmer plants it again is all but a guaranteed great hunt. Those golden kernels from last year’s crop will draw doves like a magnet. Finding a field that’s just been disked can be almost as good because food is easier to find, and doves feel secure in the flattened cover.

Given a chance, doves will concentrate on natural foods such as foxtail, ragweed, wild sunflowers, and any native grass that carries a head of small seeds. Pass-shoot doves heading into such foods.

At some point during the course of the season, a cold front will come through and the diner will fill with dove hunters spouting “we’ll get ’em next year” excuses.

Don’t believe it. Somewhere to the north of you, hundreds of hunters are probably whining about the same thing. That means the birds they’ve lost are probably headed your way.

Finding yourself in the middle of a good dove migration can mean seeing hundreds, if not thousands, of birds. I’ve had hunts with morning limits pretty much filled before the first rays of sunlight covered the cornfield we were hunting.

One mid-September afternoon, four of us surrounded a small water hole on the Kansas prairie and watched as a massive cold front with heavy rain came in from the northwest.

For two hours there was never a time when there weren’t southbound doves in sight. Limits of 15 came so fast and easy, it was more like shopping than hunting. The last five minutes of legal shooting light, guns already cased, I counted more than 100 doves that passed within easy shotgun range.

But migrating doves aren’t prone to hanging around long, so don’t waste any time. If your mid- or late-season scouting finds a flock covering a field of freshly cut corn on Sunday night, you’d better call in sick on Monday morning.

They probably won’t be around the following weekend.

The water hole that was the scene of the best dove hunt of my life on a Sunday attracted fewer than a dozen birds the following Wednesday.

Create ways for the majority of the birds to go about their business while you target smaller groups. For example, rather than setting up tight to a roost, covering all sides, set up 100 or so yards away on only one side of the trees.

Give the roost a few days of rest, then hunt 100 or more yards out from the opposite side.

If it’s a feed field, hunt it at midday and shoot only at singles or family groups of four or five birds. If you avoid the huge flocks at sunrise and sunset, they’ll come, feed, and go in peace. They’ll come back the next day as well.

A friend manages his sunflower fields in such a way, hunting them no more than twice a week. And under the threat of being forever banned from his property, hunters must be out of his fields two hours before sunset.

Leaving a bird or two shy of a limit takes some willpower, but guests soon learn it’s worth it. Even well into October, there’s no such thing as sitting by his field and looking up into an empty sky.

The later into a dove season you can find action, the more you’ll anticipate the next season to come.