3 Tips for Tapping Into Your Subconcious for Better Point Shooting 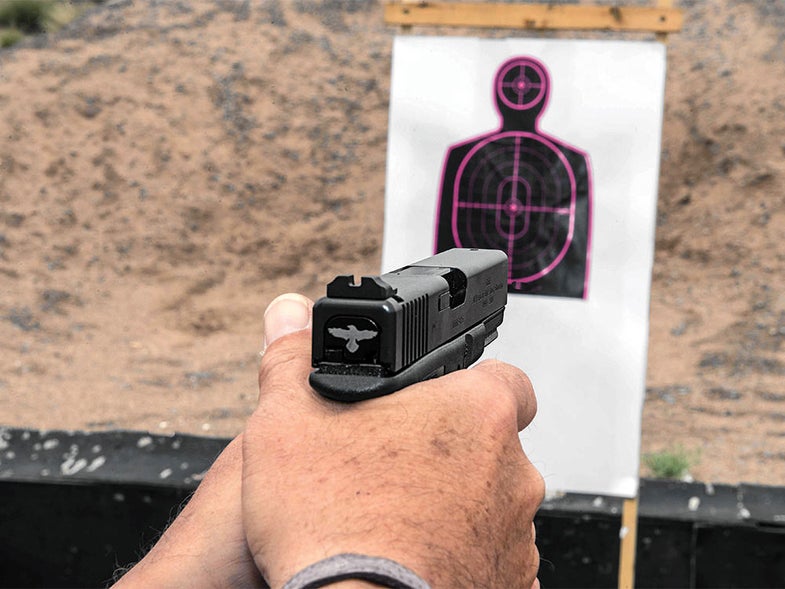 Bruce Piatt is one of the top shooters in the world and was a trainer for the New Jersey State Police. He told me everything within 20 feet should be point shooting with a defensive handgun. In a defensive situation, it makes sense to have point-shooting abilities. After-action reports show that, almost without fail, people don’t look at the front sight in a panic situation. Even trained people. Our instinct is to look at the threat. So why not develop that instinct into a usable shooting skill?

If your lizard brain takes over in a panic situation and you focus on the threat, this technique will have given you the skills and muscle memory to make the hit. If you have enough presence of mind to see the sights, so much the better. Either way, you hit the target. Of course, point shooting is also very useful in low-light situations, where seeing the sights can be hard or impossible.

The proper way to point shoot is to raise the gun to your normal shooting position. The difference is that you look at the target, focusing on where you want to hit rather than on the sights. It’s important to focus on a specific location rather than the entire target. Like they say, aim small, miss small. So focus on exactly where you want the bullet to strike. The amazing thing is, before long, that’s where the bullet will hit.

To learn some of the techniques, I took a course at the Sig Sauer Academy a few years ago called Reflexive Shooting, which is a fancy name for point shooting. It was taught by a sharp young instructor named Dylan Kenneson and was extremely informative.

For this course, we removed the sights from our guns. Those who didn’t want to remove them covered the sights with tape.

Read Next: Handgun Skills: What I Learned at the NSSF Shooting Sports Fantasy Camp

Start with the gun in the low-ready position at 3 yards from the target. On command, raise the gun and fire a shot at the target. When you are this close, use only paper or cardboard targets unless you have frangible ammo.

Repeat that drill several times until you are comfortable with it. I find it is very easy to get center hits every time at that range. It’s also amazing how fast you can break the shot when you don’t have to think about sights. Within just a few practice cycles, you should be able to easily do head shots on a USPSA target in under a second.

Once you have reached this point, take one step back and shoot again. When you are making center hits every time, take another step back and shoot. Keep moving back, and at some point you will no longer make center-mass hits 100 percent of the time. That is your maximum point-shooting distance. For most shooters, it will be 10 to 15 yards. Beyond that and you must go to sights. Of course, that is subject to change as your skills improve.