A trio of loads showcase how useful this quarterbore can be 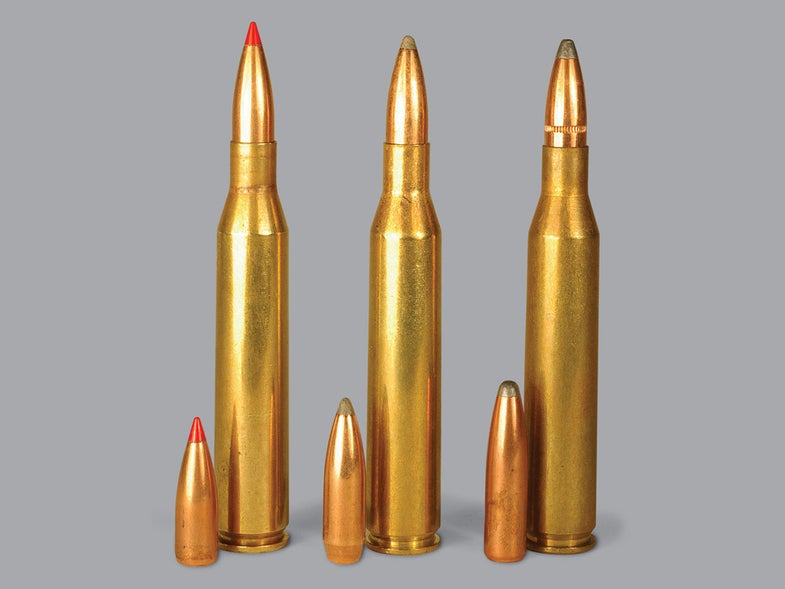 From left: A 75-grain V-Max, a 100-grain Sierra GameKing, and a 120-grain Nosler Partition. These three bullets allow the .25/06 to take on everything from small varmints to elk. John Haviland
SHARE

The .25/06 has kept the .25 caliber alive for more than 50 years because a hunter shooting just three loads in his .25/06 rifle is ready for game from marmots to big deer. The first load rockets a lightweight bullet that will tumble a coyote slinking along on the far edge of a farm field. The second is for a fast 100-grain bullet for shooting deer and antelope across prairie basins. And the third load is for 115- to 120-grain controlled-expanding bullets that will hang tough on big deer up close in the timber or out across a sagebrush flat.

Ground squirrels overrunning an alfalfa field are tempting targets. But high-volume shooting will toast a .25/06’s bore. My inability to resist that temptation is why my Ruger M77 .25/06 wears a new barrel. The .25/06 is better suited for slower-paced shooting, like 20 shots a day sniping marmots or a couple of shots when calling coyotes.

For years I tried 85-grain bullets in the .25/06 for their theoretical ability to retain velocity at long distances. But their muzzle velocities—for me, at any rate—always came up short. Reloading manuals list impressive speeds for 85-grain bullets shot with some new powders. For instance, the Hodgdon Annual Manual indicates a velocity of 3,494 fps with 52.9 grains of IMR 4451 powder. But 52 grains shot Nosler 85-grain Ballistic Tips at just 3,300 fps from the 24-inch barrel of my .25/06.

So, instead, I go with Hornady 75-grain V-MAX bullets for marmots and coyotes near and far. Several reloading manuals list velocities close to 3,800 fps for the V-MAX. Maxed-out loads in my rifle shoot about 100 fps slower. An accurate load for me is 57.5 grains of H4350 and Winchester Large Rifle primers in Remington cases for a speed of 3,653 fps. If, like me, you just have to hammer away at ground squirrels, load the V-MAX at a milder speed of 3,337 fps with 52 grains of IMR 4451.

Hunting pronghorn antelope can be a long-range game. A 100-grain bullet is customary for that type of hunting, with factory .25/06 cartridges shooting them a touch over 3,200 fps. Bullet choices available to handload range from controlled-expanding bullets, such as the copper Barnes Tipped Triple Shock, to the plain lead-core Sierra GameKing. Sierras have held together and punched clear through antelope at distances from 150 to 400 yards for me. With such good results, I see no reason to use anything else. An accurate and fast load is 55 grains of Ramshot Hunter powder that pushes GameKings at 3,412 fps. With the Sierra bullet sighted 3 inches high at 100 yards, the bullet is right on aim at 310 yards.

Firing the right bullet in the .25/06 is essential when hunting big mule deer and elk. Great controlled-­expansion bullets up to the task include 115-grain Barnes Triple Shocks and 120-grain Nosler Partitions, Swift A-Frames, and Speer Grand Slams. Over the years, I’ve killed two elk with 120 Partitions and two with Grand Slams. All the bullets went completely through the elk. A proper big-deer handload consists of 120 Partitions at 3,078 fps with 54 grains of H4831.