5 of the Best Handgun Reflex Sights

Supreme accuracy and speed is no longer just for competitive shooters 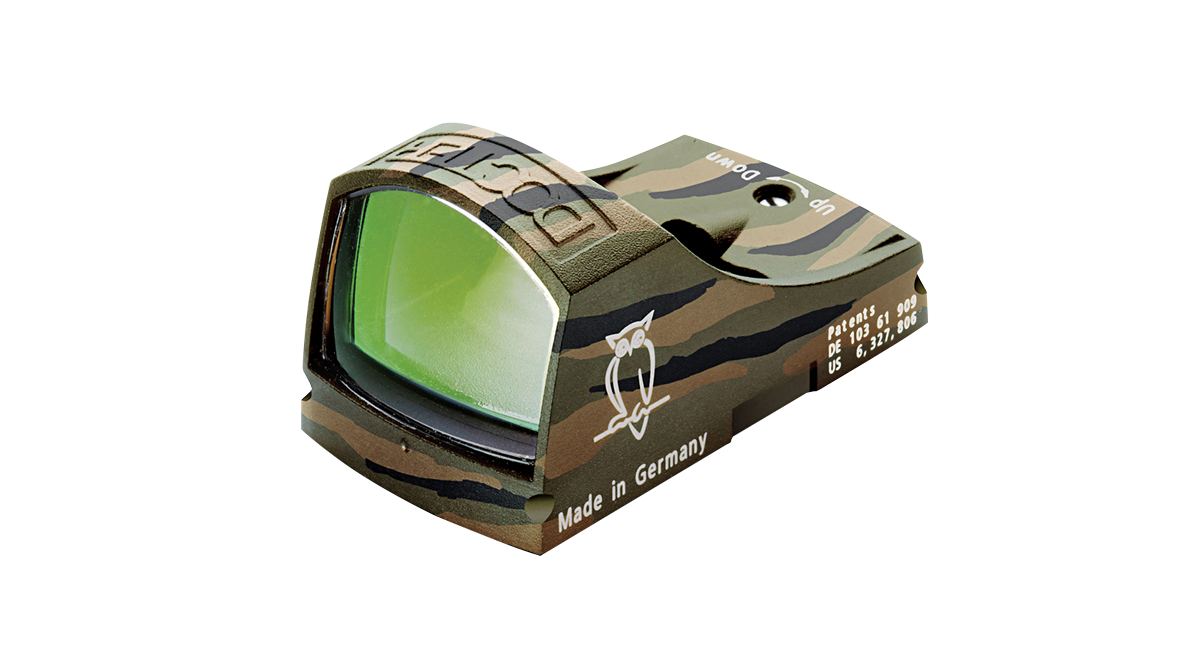 What is a reflex sight? It was created in 1900 as a better gunsight for pilots and anti-aircraft gunners.

Based on a visual collimator that reflects the image of a reticle on a pane of glass, it allows the shooter’s eye to move in relation to the reticle while maintaining the point of impact.

In the 1970s, when LEDs were refined, reflex sights pioneered by Aimpoint could be used in total darkness. By 1990, professional handgunner Doug Koenig began using them to eventually win 10 world titles.

“Red-dot sights are fast, superior in low light, and allow the shooter to simply focus on the target,” says Koenig. They also have virtually no parallax, a huge field of view, and long eye relief. And they allow aging shooters with presbyopia­—those who wear reading glasses—newfound accuracy. The downside has been their bulk and dismal battery life. Plus, they required custom mounts and were too bulky for routine carry.

But when circuitry was miniaturized, manufacturers made sights an inch tall. Most now have a battery life measuring in months.

Certainly the mini-reflex rage is here, and more products are sure to come.

The German firm’s sight weighs .875 ounce and auto-adjusts the dot’s brightness based on ambient light. I like it because it’s one of the smallest and simplest reflex sights available. A soft-rubber cover turns the unit off by blocking all light; when I attach it to my belt via a string, the cover comes off as I draw, turning it on. At dusk however, the dot appeared too bright. But it’s light, tough, and otherwise works great. ($282)

The RMR—for ruggedized mini reflex sight—features tritium that glows in the dark, plus a fiber-optic system that takes over in daytime. I love that it doesn’t have batteries to fail, but the fiber-optic system is not always bright enough at dawn and dusk. Machined from aluminum, all in all it’s exceptional. ($577)

Bushnell’s unit is heavier than some other models at 2 ounces (gasp!), but it works well and is the least expensive one here. It’s got a sensor that shuts the unit off when it’s covered and adjusts for brightness. As with most auto-regulating sights, however, the use of a flashlight at night can confuse it, making it too dim under some conditions. ($193)

Probably the most advanced mini-reflex today. Leupold incorporated motion-sensing technology into the Pro to turn it on even before the sight picture can be acquired. (I doubt even Doc Holliday could beat it.) It has an auto-brightness setting and the ability to leave the dot at a pre-set intensity. ($749)

Burris makes the only sight listed here that uses a simple push-button on/off switch. The button selects three brightness settings and an auto-dimming function. At first I cared for this feature. But now I simply turn the unit on when I holster my gun and forget about it when I put the gun back in my safe. It’s also affordable. ($287) ––Jeff Johnston

When you head to the range to develop defensive shooting skills, keep in mind that it should be about more than hitting targets. Too often, people merely work on their marksmanship and not on their ability to apply shooting skills in the context of an unexpected life-or-death situation. To do that, you need to work your brain as much as your trigger finger when you drill.

When you head to the range to develop defensive shooting skills, keep in mind that it should be about more than hitting targets. Too often, people merely work on their marksmanship and not on their ability to apply shooting skills in the context of an unexpected life-or-death situation. To do that, you need to work your brain as much as your trigger finger when you drill.

Defensive shooting is something that happens unexpectedly, but this is the opposite of how most people drill at the range. After all, if you knew you were going to be in a position in which you would need a gun to defend yourself, you’d avoid it. That’s Self Defense 101: Avoid confrontation, be aware of your surroundings, and escape danger when possible.

It’s vital to work your survival mindset into your range drills. Properly done, defensive shooting involves a fully engaged brain and hyper focus on the threat. You likely won’t have time to think about where your feet should be or count the rounds you’ve fired in anticipation of a reload. Learning to process information just before or during your shooting should be a part of your training.

The goal of defensive shooting should be to fire a shot with “combat accuracy” as quickly as you can, meaning a shot that will significantly diminish your target’s ability to hurt you.

Many people will choose a fixed target size for any given drill session and then see how fast they can shoot it. The problem with this approach is that in the real world, you never know ahead of time what distance you will be from your target or how large it will be, to say nothing of other variables such as presence of bystanders, potentially poor visibility, and the degree to which you are surprised or panicked. All of these things will affect your shooting as well.

When you are doing defensive shooting drills, you should try to use a couple of different-size targets and then find a way to engage them in a random fashion. This will force your brain to process what it is seeing and apply the right amount of skill for the shot you need to take.

Generally, I recommend shooting most of your defensive drills from 3 to 5 yards back, with targets about the size of an 8.5 by 11 piece of paper or a pie-plate to represent a human chest and a circle about 3 inches in diameter to represent the center of the head.

In a formal class setting, the instructor can deliver commands that the students must process before they engage the appropriate targets. The more targets and the more different colors or labels, the more varied the commands can be. Take turns running drills of this type with a training partner or by recording a series of commands that you can play back on “shuffle” through an MP3 player under your hearing protection, or get the Combat Focus Shooting iPhone App, which will give you appropriate commands.

As you progress, add targets at different distances and different (but safe) angles as well to increase options.

One way to modify your training experience and add an element of uncertainty is to mix up the number of rounds you fire during each string by downloading your magazines. One of the worst range habits to develop is firing a fixed number of rounds. Combining different shot strings with randomly downloaded magazines (I recommend filling them from 50 to 70 percent capacity and varying each mag) introduces an element of chaos into your training that is much closer to what you would experience in a real gunfight.

In an actual fight, you have no idea how many rounds you will need to fire, and it is highly unlikely that you’ll have any indication of the need to reload before your gun runs dry.

As a general rule, 3- to 5-round strings of fire are great for training on the chest-size targets. Typically, I recommend firing only single shots at the head-size targets you engage. Force yourself to go slowly enough to be confident that you can hit those targets with one round.

Try to visualize an actual threat while you are shooting, and use your visualization of that threat being stopped as your cue to stop shooting. This will help you get into the mindset of defensive shooting rather than just target shooting.

In a real fight, your brain and eyes will be focused on the person who has ambushed you and is threatening your life.

Looking at your gun during defensive shooting is like looking at your brake pedal when a deer jumps out into the road. It’s not what really happens. Learn to run your gun by feel, through consistency. This principal doesn’t just apply to gun handling, it also goes for your shooting: Only use your sights when you need to. If you consistently use an athletic approach to your shooting, you will be able to attain ­combat-accurate hits on chest-size targets under typical defensive shooting conditions with both arms fully extended and the gun in line with your line of sight. Only look at your sights when you need to while shooting. Getting comfortable with focusing on other things (the target, potential cover to move to, etc.) will further help your training to fit the context of an actual fight.