5 Problems with Your Duck Decoy Spread, and How to Fix Them

When ducks show interest but you're not getting shots, it's time to adjust your setup 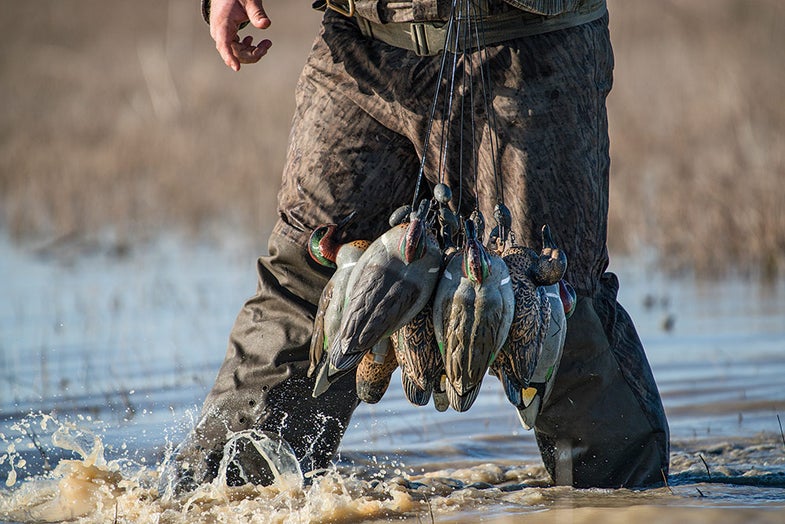 Pulling dekes from the spread by late morning can help draw in pairs and singles. Stephen Maturen
SHARE

If ducks approach your spread and then suddenly flare off in different directions, I can almost guarantee there’s something wrong with your hide. But when ducks approach your setup and then give you the cold shoulder, buzz by out of range, or set their wings for the wrong spot—and it happens more than once—the problem is likely with your decoy spread. And the fix is a little more complicated than throwing on some more face paint.

Instead of just hoping the next flock of ducks will finish, get out there and troubleshoot the spread. Here’s how to make tweaks for the most common fly-by scenarios.

Problem 1: Ducks set their wings but are landing way far out.

Analysis:
A decoy spread situated too close to the hunting blind or hideout doesn’t invite ducks in to a convenient landing zone that’s well within shotgun range.

Fix:
Move the decoy spread farther away, offering a gap or slot between you and the decoys that shows the next flock an inviting place to land.

Problem 2: Ducks are locked up on the spread but then land just short of shotgun range.

Analysis:
This problem often happens in a crosswind, when ducks approach into the wind but put their landing gear down well short of the decoys that are right in front of you.

Fix:
When hunting a crosswind, move the whole decoy spread farther upwind so that ducks setting their wings into the wind for a short landing are doing so right in front of you.

How to Make Dual-Purpose Duck Decoys

Problem 3: Ducks show interest, flutter, but then flare (and your hide is perfect).

Analysis:
If you are certain that everyone is hidden well (including the dog), then the most likely problem is that there’s no place in your spread for the birds to land.

Fix:
Go with a pod plan. Split your decoy spread into two groups, one to either side, with an inviting gap in the middle.

Problem 4: Heads turn, the ducks take a closer look, but then the flock continues on.

Analysis:
This is the most vexing of all decoy spread problems. You can sit and bird-watch, or you can get creative and do something about it.

Fix:
Fixing this situation is an art, not a science. But there are several concepts to consider:

A common problem is that the decoy spread is not a spread at all, but more of a knot. When hunters set up in the dark, they often end up with a tight, unnatural look. Get out there and create some breathing room. Think about repositioning the decoys in loose pairs that don’t sit in any specific pattern.

Also, try adding goose decoys. Ducks trust Canada geese, and a pair or trio of honkers in the spread will comfort suspicious ducks.

If you have a spinning-wing decoy out, turn it off. Spinners are great for getting ducks’ attention, but they can sometimes spook pressured ducks at closer ranges. If your spinner has a remote, try hitting the kill switch as soon as the ducks have seen your spread and start to work closer.

On the other hand, lack of motion can be a deal-breaker for interested ducks. A simple jerk cord will create realistic motion on a windless day.

Problem 5: Pairs and singles are avoiding you altogether.

Analysis:
As morning wears on, flock size shrinks until it seems that it’s just pairs and singles looking for refuge. But these ducks have been getting shot at all morning by hunters with outsize decoy spreads.

Fix:
It may seem counterintuitive to remove decoys, but doing a partial pickup and leaving out only six or seven blocks can make enough of a difference to attract straggling doubles and singles. Also, carry a couple of full-body dekes and place them really close to your blind, as part of the new set. Ducks standing around on shore are ducks that feel safe.