5 Things I Learned at the 2017 Outdoor Life Bow Test 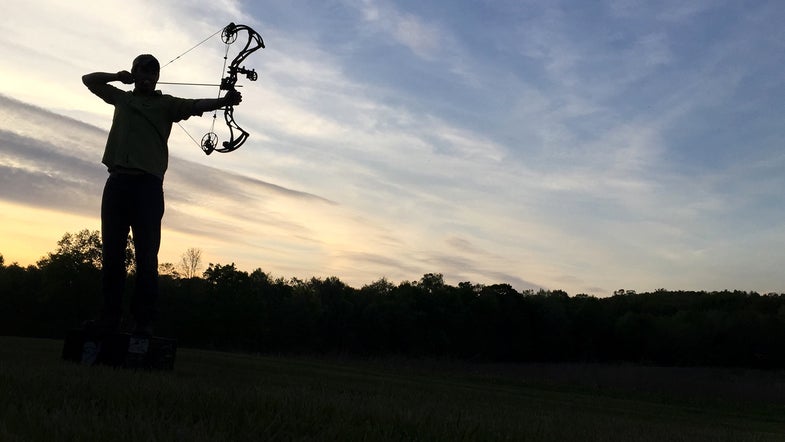 My shoulder hurts. And I love it.

I’ve never been a mathematical guru but I learned to count at a fairly young age and I try to brush up on my counting skills from time to time. That said, the number of times I’ve triggered an arrow from a bow over the past month exceeds my number of fingers and toes by a fair bit.

Outdoor Life’s 2017 Bow Test is a wrap. The last arrow was shot about a week ago. There were 15 compounds involved and my first order of business was to set up each for our objective testing. This involved a series of tests conducted at Stress Engineering Services‘ incredible lab facility, where we partnered with the Stress team to employ their accelerometers, anechoic (sound-deadening) chamber, high-speed cameras, sound-level meters, and enough processing power to make NASA jealous—all to determine accurate bow speeds, vibration frequencies, and noise levels.

To prepare for this, I fitted each bow with a D-loop and a fall-away rest. Each bow was then paper-tuned. That process required roughly 10 shots per bow. So there’s about 150 shots. After the objective testing, it was time to retune each bow, add sights, and prepare for the in-field testing. That took another 25-30 shots per bow. So, another 450 shots or so. Toss in a few bows that proved problematic and some that I just wanted to keep shooting and I figure I was at around 1,000 shots before the field test began.

Once arriving in southern Indiana (the location for our field test), I shot each bow again to ensure nothing had changed. Add another 50 shots to the tally.

And then, the testing began…

I’ve set up plenty of bows over my hunting career but I can’t say that I’ve ever done so in such a marathon fashion. That kind of repetition can teach you plenty. Here are five things I learned from this year’s test.

For this year’s test, I was feeling my oats. Rather than opt for the standard biscuit-style rest employed in previous tests, I wanted to outfit each bow with a drop-away rest. I reached out to the good folks at Tru-Glo and they graciously offered to supply their newest drop-away model, the Lock-Fire, for each.

I’ve installed dozens of drop-away rests. But I’d never installed a Lock-Fire. After 10 minutes of fumbling, I’d decided the rest was one of the worst I’d ever used. Then I decided to read the directions…

Ten minutes later, I had the rest installed, tuned, and functioning as it should.

I suspect many new products get a bad rap simply because they’re different and that unfamiliarity keeps folks from seeing their true potential. I know I was guilty of that. Because I didn’t know exactly how the rest worked, and was too stubborn to admit I needed a little help from the owner’s manual, I was ready to write that rest off. That was a mistake. In the end, the rest proved pretty simple to set up. Sure, there’s a slight learning curve but that can be said of just about anything.

With 15 D-loops to tie, I tried to save a little money by ordering a cheaper loop material than I’ve used before. Big mistake. That floppy rope was a pain to tie, tougher to use, and produced the first loop failure I’ve personally seen.

Never again. You can save a little money or do the job right. There’s usually no middle ground.

I was stunned by the amount of tuning and setup required of bows that were fresh from the factory. One bow came with a critical component installed backwards. Another featured a pre-set D-loop that was nearly three inches out of center.

The lesson here? Don’t take a bow out of the box and assume the setup is correct. Double-check everything. Let anything that goes wrong be your fault, not someone else’s.

4. YOU CAN’T EVALUATE A BOW WITH ONE SHOT

When you buy a new bow, how do you choose your favorite? I’d bet that you visit a local bow shop, take a few test shots, and fall in love. That’s a mistake. Shooting so many bows, one after the other, gives one a newfound perspective on what’s “good.”

We saw this most apparently during our in-field test. We’d shoot a bow, love it, and wonder if anything could top it. Then we’d pick up another bow, shoot it, and realize topping it was indeed possible.

To truly evaluate a bow, you need to spend some time with it and—most importantly—you need to shoot it side-by-side with other makes and models. Firing an arrow from one bow, grabbing a different model, and shooting right away will reveal differences you might have otherwise missed.

I’m not one of those guerrilla bowfare types. Sure, I try to stay in shape but my idea of a “workout of the day” involves shovels, splitting mauls, rocks, and whatever else needs to be done around my place. I’ve poked plenty of fun at the CrossFit crowd. That said, fatigue is a real thing. After shooting a few hundred arrows in a day, I promise you’ll agree.

By the end of the test, I could feel my form waning. My accuracy suffered. And my ability to fairly evaluate bow performance declined.

This is all the more reason to keep your off-season practice sessions as realistic as possible. Shooting dozens of arrows per day may prepare you for a multi-day tournament, flipping a tire around in the mud may give you reason to post a “I’m-pretending-I-don’t-know-I’m-taking-a-selfie” image to Facebook. But it does little to prepare you for bowhunting. In the woods, you’re not likely to face multi-shot scenarios. You’re going to get one shot at varying distances from varying angles and positions.

Sure, repetition will improve your form and accuracy. It will strengthen your shooting muscles and delay tiring. But when fatigue sets in—and it will—your practice session isn’t doing what it’s supposed to do.