5 Tips for Shooting a Shotgun Better and Faster

Keys to quicker accuracy with your scattergun 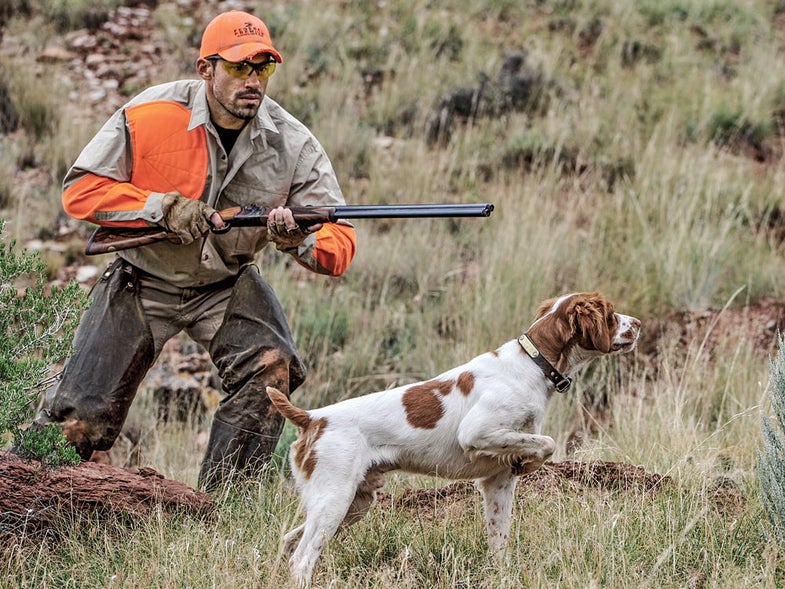 A Brittany with a nose full of sharptail scent goes on point in the uplands of Wyoming, while the hunter gets ready for an explosive rise. Lee Thomas Kjos / The Raw Spirit
SHARE

If you can’t shoot faster than that, you might as well not shoot at all.” That was the rather blunt directive I received from a grouse-hunting guide a few years back. And while it may not have been the most diplomatic way to convey his message, the guy was absolutely right. I had done my due diligence before the hunt; I had spent time on the range, and I could smash 20 or more skeet targets every time out. But when it came to knocking down birds in real time, I was floundering.

We don’t typically associate being in a hurry with improved shotgun technique, but it is possible to become faster and shoot more accurately at the same time. This is especially important late in the season, when birds are wary and tend to flush more readily and fly hard. If you want to hit those birds, you have a need for speed, and these five tips will help you shoot faster without sacrificing accuracy.

1. Practice Your Gun Mount in the Field

Before the dogs fall on point for the first time, take a moment to mount your (empty) shotgun and track the bead along the tops of nearby trees. This accomplishes two things: First, you’re reinforcing the techniques you have been practicing all summer and fall at the shooting range. And second, you’re making sure that there’s nothing that will impede your gun mount. Shooting in a heavy coat and gloves with an e-collar remote strapped to your chest can lead to hang-ups, so be sure the recoil pad has a clear path to your shoulder.

2. Start the Swing as the Gun Comes Up

A proper swing originates at the hips. But you should actually start your swing before the gun is mounted, saving time and promoting a smooth, clean follow-through. To practice this, work on making your torso track the target. Your lower body should remain in position with your feet planted, while your shoulders remain square with the bird. As the gun mount is completed, you’re already in position and you’ll naturally follow through after the shot.

Many hunters miss shots because they lose track of their shotgun. If you are carrying your gun propped on your shoulder with your free hand dangling by your side, then there’s little chance that you’ll be able to mount it quickly and efficiently. Instead, keep the recoil pad directly below your shoulder and position your free hand on the forend so that it can instantly guide the muzzle toward a rising bird. Carrying in this manner is safer, too—the barrel is pointed upward, and you’ll have better control of the gun if you fall.

Read Next: Shotgun Tips: How to Remedy Equal-Eye Dominance

Tight muscles make for a herky-jerky swing. And if you clamp down on your shotgun with vise-like authority, your track to the target will look like a radio wave. The secret is to hold the gun firmly but not too hard. If your grip would break an egg or you can see white in the knuckles or joints of your hands, you’re applying too much force. Easing up will make you faster and more precise.

This is more of a psychological problem than a technique issue, but following the target after the mount makes it impossible to take a quick shot. I don’t judge; I’m as guilty of this as anyone, and it takes mental preparation to break the trigger the moment the gun finds the pocket of your shoulder. Our natural instinct is to check our bearings—even while shooting at live birds—but that’s a mistake. Don’t misinterpret this to mean that you should slap-shoot and rush the trigger, though. Instead, you need to time muzzle position and trigger break so that there is no hesitation when you are on target.