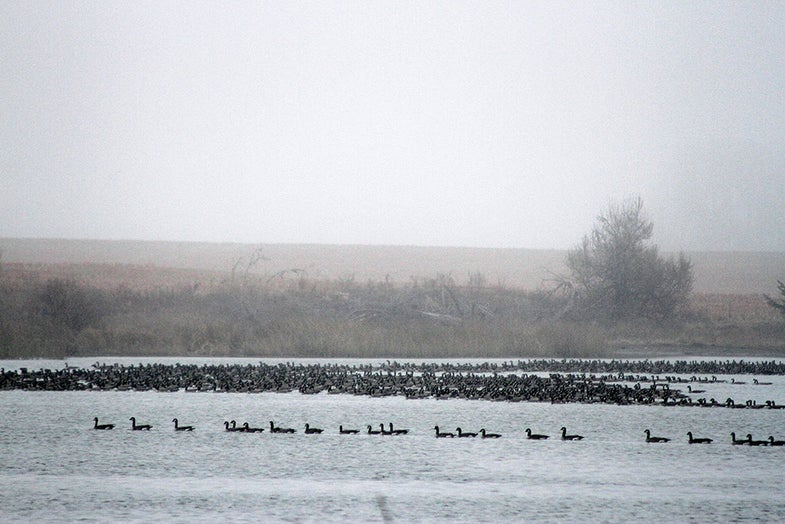 Hundreds of Canada geese loaf on a lake in Kansas. Natalie Krebs
SHARE

Pennsylvania-based waterfowler Kevin Addy describes himself as a free guide: He’s done a little bit of professional guiding but mostly gave it up in favor of chasing birds on his own time, with buddies and whoever else wants to tag along. He targets everything from sea ducks to snows, and in September, Addy hunts hard for Canadas on public land and in fields where he’s secured permission.

Outdoor Life: How do you use binos or a spotting scope to aid your scouting?

Kevin Addy: I always use optics—it’s amazing sometimes what you pick up with a good pair of binoculars. You see low spots and high spots in a field. And you can focus in on specific spots the birds are after. You need to mark those locations.

If you put up your binoculars and there’s a plastic bottle out there, and every bird is hitting near it, you know when you get out there you’re looking for that plastic bottle. Optics help you mark landmarks and help you judge distance much better than the naked eye.

OL: When do you start scouting each year?

KA: Usually I’m scouting year-round. And it’s not a big deal—when I say “scouting,” I mean I’m usually driving down the road and anytime I see birds, I look where they’re going and where they’re coming from. I’m not really dialed in, but I’m paying attention. After doing that for years, you pick up on patterns and get an idea which hunting areas to focus on. It’s hard to scout the day before the season because you just get a little piece of the picture. So as it starts getting closer—probably three weeks out—I’ll dive into scouting more.

OL: What does that entail?

KA: I’ll ask farmers when they plan to cut their crops—which crops and which fields. I try to get a better idea of which direction the birds are flying in and where they’re feeding. I also pay attention to where birds aren’t anymore. A lot of birds in my region hang out in safe havens, like industrial parks. If a hefty number were hanging out there and now some are gone, I’ve got a good idea that patterns are shifting. I focus on mornings and evenings, although I pay attention during the day. If I happen to run out for lunch and see birds, I might take a detour, skip lunch, and try to follow them.

OL: How does tailing birds in a truck usually work out?

KA: If they’re in the air, I try to figure out where they’re going. In the early season, there’s still a lot of foliage and standing corn, so you can’t look all the way across a cornfield to see where geese are landing. A lot of times you lose them when they get low. Resident birds tend to fly low anyway, and sometimes it may take me a few days before I figure out where they’re going because I follow them and then I lose them. But a lot of times they will follow the same flight line night after night, so I’ll sit where I lost them the night before. Eventually I figure out which fields they’re hitting.

Read Next: How to Scout for Geese: 3 Tips to Find Birds Before the Season Opener

OL: What else are you noting besides location of birds when you scout?

KA: You can have 300 birds coming to a field, but that doesn’t mean you can shoot them. If you’re not hidden well, you’re only going to pull birds out of a flock, instead of setting up where everything is perfect, getting your limit, and getting out before you educate a bunch. So I’m scoping out the whole hunting site: Where can I hide, what’s the wind doing, what’s the sun look like? I look at all these factors so I can plan. Taking notes is a good idea, too. I scout a lot of different fields and keep track as I go, so I know ahead of time how I’m going to hunt a location. I keep notes and draw sketches on a notepad to detail out the wind directions, the bird patterns, and the best hides.

OL: What’s the biggest mistake most hunters make when it comes to scouting?

KA: They just look at the birds, and that’s it. When I’m scouting, I try to get to the field before the birds do. Then I pay attention to whether they’re coming from multiple roosts. Those setups tend to be better because you have some spacing between groups. When the birds come from the same roost, you get big flocks in a short period of time. I also pay attention to how they approach the field—I don’t want them to fly over and then come back. I want them to land immediately. Where they’re landing in that field is important too, because where you see birds in a field and where they land may not be the exact same spot.