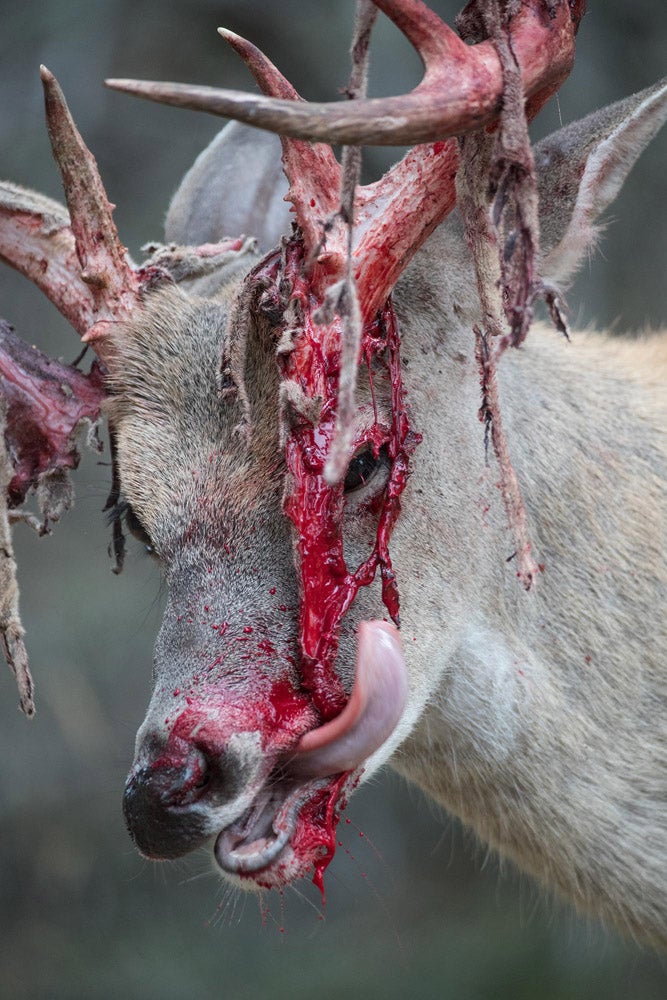 The buck was so absorbed in the hanging velvet. Donald M. Jones
SHARE

This is it –– the time whitetail watchers have been waiting for all summer. Antler velvet will peel sometime over the next few weeks in most areas of the country. Our fascination with antlers officially begins and from here on in it is all about wrapping your hands around a set of those beautiful horns.

Most bucks complete growing their antlers by mid-August. Antler tissue begins to mineralize and harden around that time and once the blood flow ceases and the tips of the antler harden, the peeling process begins. For some bucks it’s a drawn out process lasting a couple of days, others get the job done in an hour or two. For all it’s a messy process as the soft blood-filled skin is shredded and torn away from the hard bone.

This is a great time to get trail camera shots of peeling bucks. Lucky trail camera buffs sometimes get pics of bloody faced bucks working brush or using their hind hooves to work the soft peeling skin from their antlers. Most just pick up the change; one day he is in velvet, a day or two later he is hard horned. Most buck watchers will see some indication of antler peeling sometime between now and mid-September.

Deer antlers are one of the fastest growing tissues we know of. Whitetails are capable of growing an inch or more of antler in a 24-hour period. Antler growth is governed by photo-periodism, or the amount of daylight reaching a buck’s gland receptors. It’s all part of the fall breeding cycle: testosterone builds, antlers harden, dominance is established and does get bred. Ain’t it all grand?

Sometime around Labor Day. It’s when whitetail bucks shed the velvet from their antlers. Velvet peeling typically takes a day or two to complete and if you are lucky enough to catch a buck in mid-peel, as photographer Don Jones has done here, it is a pretty dramatic sight. Bloody red velvet hangs like Spanish moss on a live oak until it is torn completely off by hoof or bush.

Antler peeling is related to photoperiod or the amount of light transferred through a deer’s eye which then impacts the pineal gland located at the base of the brain.

Across most of deer country, peeling will be complete by late September and about 10 million or so bucks will then begin ramping up for the rut. Necks will swell, testosterone levels will rise, and antlers will be used to shred bushes and trees.

Within the next few weeks, game cameras across the country will be providing hunters with their first real look at what the bucks they have been watching all summer look like in hard horn.

This buck was photographed on a piece of private land in northwestern Montana (not fenced).

Photographer Don Jones found the buck as it fed with several other deer one evening during the first week of September of 2016.

“I saw that he was shedding,” says Jones, “but then noticed him walk away from the other deer with his head low to the ground.”

“It wasn’t until I saw him turn toward me that I noticed that he was chewing or choking on his own velvet. The buck was so absorbed in the velvet hanging in front of his face and in his mouth that he paid little attention to me.”

“I then noticed that the buck didn’t have the velvet stuck in his teeth or throat. He was just trying to eat it but it was still attached to the base of the antler. The more he pulled the more he bled and every so often he would stop chewing on the velvet so he could lap up the blood as it rolled down his face.”

“He sought the assistance of some down brush (logs/sticks), but finally had enough and took off running into cover. I found him a couple of days later with his antlers totally cleaned off.”