An Easy Recipe for Wild Ramp and Bacon Dip

Serve this snack with ripple chips and watch it disappear 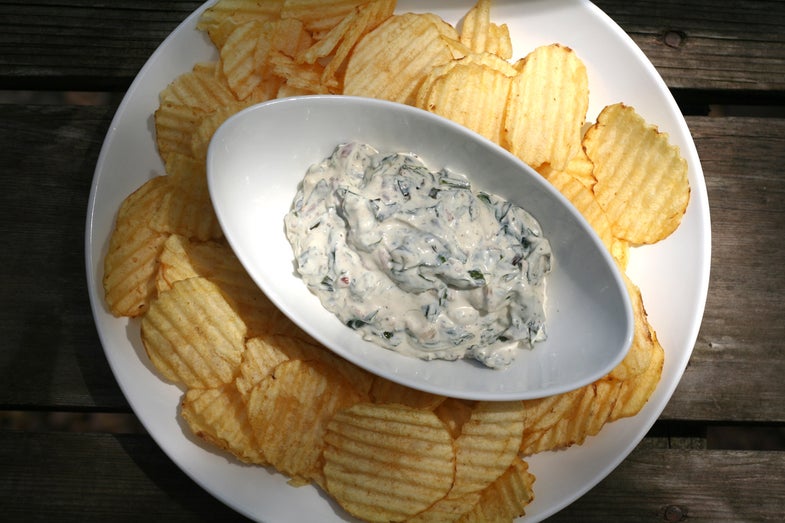 It is no secret that I am a big fan of ramps. I love heading out in early spring to gather ramps, and I love the recipes I can use them in. I think one of the reasons I love them so much is because they’re only around for a short time. I try to limit the number of ramps I pick, so there are always enough out there for others and future seasons. I usually make the same handful of ramp recipes, although I do try new things from time to time. I make a ramp-and-nettle chimichurri that is fantastic on venison. I usually try to make enough to freeze and have on hand for later in the year. I also dehydrate some ramps and make a ramp salt (very similar to a garlic salt) that I can use throughout the year as well.

So what exactly are ramps? Ramps are a form of wild onion that grows in most parts of the east and central parts of the U.S. Here in Minnesota, they are one of the first spring plants to pop out of the ground. If you can find them early enough, they are tender and packed with a magnificent garlic and onion flavor that you won’t find in anything else. Ramps are very easy to identify by their broad, smooth green leaves. The leaves fade into reddish to purple stalk, and then end underground with a white end. The white end can sometimes resemble a bulb, although it is not a true bulb and more of an underground swelling. Ramps grow in clumps and are usually found in very moist, sandy soil—often near rivers and streams, and on hillsides.

One of my favorite snacks is Old Dutch ripple chips paired with French onion dip. You might say I have some impulse-control issues when they are around. A few years ago, I thought I try to make my own French onion dip with ramp,s and it turned out really well. So I played around with the recipes a bit and added a little bacon to it and came up with my absolute favorite snack of all time. This dip is one of the things I look forward to making every spring, because I only get to make it once. I have been known to make a batch of this dip and eat it all, along with a couple bags of ripple chips.

Makes about 2 cups of dip

8 ounces of ramp stems and bulbs

Salt and pepper to taste

1. Cook the bacon strip until crisp reserving the fat to cook the ramps, chop the bacon into small pieces.

2. Roughly chop the ramps and sauté over medium high heat in the bacon fat until golden brown and soft. Season with salt and pepper to taste.

3. Mix together the sour cream and cream cheese until smooth and well incorporated. Set aside.

4. When the ramps are soft and golden brown, and little dark bits have formed, add the sugar and wine and stir together. Cook until the majority of the wine is burned off.

5. Add the ramps to the sour cream mixture and stir to combine, adding the bacon pieces as well. Season to taste with salt and pepper, and enjoy with your favorite chips.