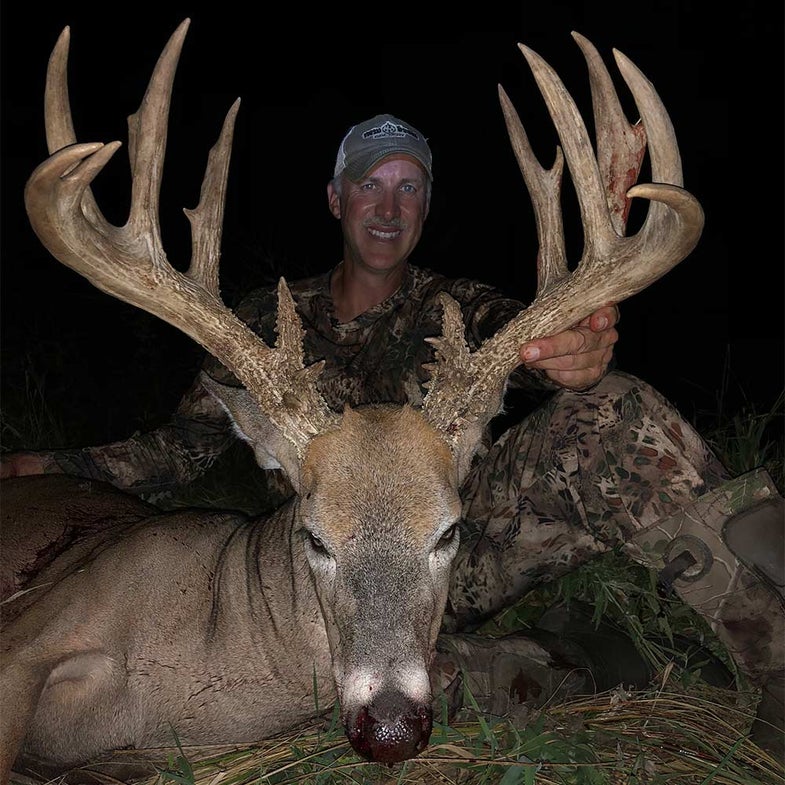 It was a crisp, cool evening in September 2014 when Andy Morgan passed up a three-and-a-half-year-old buck with a rack any bowhunter would be proud to have hanging on their wall. The Nebraska whitetail was ambling along the edge of a treeline separating two fields, and Morgan’s first inclination was to draw his bow. Then he thought again and decided to let it walk.

Morgan’s rationale was typical for him, and bespoke his confidence as a hunter: why shoot a buck that’s likely to be a real monster in a few years? The Tennessee bowhunter’s biggest bow-killed whitetail up to that point was a 168-inch buck, and the Nebraska buck that he saw was close to that. Still, it might not have topped 170 inches, which was Morgan’s goal for the season.

His patience was rewarded on a hot evening in mid-September this year when he arrowed the same buck, which now grossed somewhere in the mid-190s. With deductions for stickers and split tines, the buck is likely to score several inches less than that after the 60-day drying period, but it’s still an exceptional trophy. The buck is considered to be one of the largest ever taken by a bowhunter on video, as Morgan and his cameraman David Mullins filmed the hunt for an upcoming episode of American Archer, which airs on The Outdoor Channel.

If the rack stays somewhere in the 180- to 190-inch range, Morgan might find his name high on the list of Nebraska’s all-time whitetail record scores. The biggest typical bowkill in the Cornhusker State was a 189 4/8 bruiser taken in 1978. Because of deductions, Morgan’s buck won’t challenge the typical record, but it could wind up in Nebraska’s top 10. According to records kept by the Nebraska Game and Parks Commission, the current 10th-place typical archery buck scored 172 0/8 and was shot in 2007.

On the other hand, as a fairly symmetrical non-typical, the 6×7 mainframe rack should score in the 190s. In a state known more for its eye-popping non-typicals, however, the buck doesn’t come close to matching Del Austin’s famous 279 7/8-inch trophy, a former archery world record. Still, Morgan’s buck might rank somewhere in Nebraska’s top 30 among non-typicals. The current 20th place buck taken by a bowhunter in that state tallied 194 0/8 inches.

In late August, when Morgan saw the buck in a trail camera photo, he recognized it by the rack’s configuration as the one he let walk a few years before. In fact, the 46-year-old bowhunter hadn’t spotted the buck for a few seasons, and assumed it had been harvested or staked out new territory somewhere nearby.

“I hadn’t seen the buck since I passed him up, but I hadn’t hunted the early season at that place [a central Nebraska farm] since then because we were always filming somewhere else,” notes Morgan. “I never saw him again until this year, so apparently he was rutting and wintering somewhere else – he was just so sharp that he didn’t get out in plain view much.”

The buck’s one slip-up came after Morgan was able to put together a rudimentary pattern based on more photos taken with Cabela’s and Myer trail cameras a week or so before the early bowhunting season opened. The whitetail turned up in a couple of photos near a natural funnel where a hayfield meets a wood line. Morgan hung tree stands in the area and the buck eventually took care of the rest.

“In six days of hunting, I saw him three times, but never had a shot,” says Morgan. “Every time I saw him he would walk by the same place, but I just didn’t have a favorable wind to set up there. All I could do was watch him walk by. I could have killed him the first set if the wind had been right for the stand, but it wasn’t, and I didn’t want to mess up by trying to set up on him with a bad wind. You don’t get to make any mistakes on a buck like that. I killed him on the fifth set.”

Morgan’s trophy hunt in Nebraska was part of his Western hunt series, when he and Mullins stocked up on video for the TV show, which airs Sunday mornings on The Outdoor Channel. Beside the big whitetail, Morgan also arrowed a trophy mule deer in Montana and another bruiser 10-point whitetail buck in Mississippi.

If Morgan’s name seems familiar, it might be because he’s one of the top professional bass fishermen in the country. The lanky, happy-go-lucky Southerner has won almost $2.5 million fishing various bass tournaments. Along the way he’s scored three Angler-of-the-Year titles, including back-to-back championships in the FLW Tour circuit during 2013-2014. Next year, Morgan will join other top anglers from the FLW Tour and Bassmaster Elite Series in the new Major League Fishing Pro Tour. Those tournaments also will be covered on The Outdoor Channel.

Not surprisingly, the well-rounded outdoorsman thinks that bass fishing and deer hunting have a lot of important similarities, including how bass and bucks use terrain and habitat to their advantage, and stick to discernible patterns. As he is quick to point out, it takes planning, patience and perfect execution to win big bucks in the bass tournament world or harvest big bucks during archery season.

Making Your Own Luck

“If a bowhunter and his equipment are prepared to take advantage of an opportunity, then it’s just a matter of waiting until the right time,” says Morgan. “The best tool in a bowhunter’s tool pouch is patience. If you do your homework and pattern a buck’s movements correctly, you can come up with a good plan. All that aside, my being patient and waiting for the time when everything was in my favor is what finally did in that Nebraska buck.”

Morgan had plenty of time to think of how to set up a successful hunt for the buck. As he passed through on the way to a successful Montana mule deer hunt, he stopped at his Nebraska lease long enough to check his trail cameras. The buck first showed up on a camera on one of the alfalfa fields. Based on the whitetail’s standard approach direction, Morgan knew that if the wind would drift out of the east or southeast he would have a chance.

“The weather was hot – getting up toward the 90s – and you wouldn’t have thought he would be out roaming around during the day, but there he was on the camera,” says Morgan. “I figured that I could get a shot at him if I waited and let him come to me instead of trying to get on top of him. The evening I killed him, the wind was out of the east and I knew the conditions wouldn’t get any better.”

Morgan was right. The buck came into view with about 30 minutes of daylight left, feeding along the edge of the alfalfa field and headed in the general direction of the spindly cottonwood tree where Morgan waited in a Lone Wolf lock-on with Mullins perched close by.

“The tree was just big enough to support both of us,” says Morgan. “We were about 10 feet off the ground and we used a Lone Wolf climbing stick and limbs to get up there. I figured ‘well, if he does come along, I’m going to have to take a shot while he’s still out there a ways, because he’s definitely not going to walk up here too close before we get busted.’”

As it turned out, the buck approached to within 45 yards when he reached a point where Morgan had an open – and for him, easy – shot. The Tennessee bowhunter was shooting a New Breed GX2 bow with a True-Fire Sear release, and he sent a Black Eagle arrow with 100-grain Grim Reaper expandable broadhead through the buck’s lungs. It ran away from the field edge into the woods, and Morgan decided to leave the buck alone and wait until after supper before searching for it.

“When I shot it felt really good. I held where I wanted to, but I didn’t see the arrow hit. I heard it, but the buck didn’t run hard. He just kind of bounded away about 30 yards, then flagged,” recalls Morgan. “When we checked the film it looked like I’d double-lunged him. So we went back to the house, ate supper, and returned. We found a fairly light blood trail in the field, but then it get heavier in the woods, and he was about 60 yards from the edge.”

When Morgan released the arrow, he thought he was taking a shot at a buck that was better than his best, though still scoring somewhere in the 170s. When he saw the rack’s mass and passed his hands over the tines and main beams, he changed his mind.

“I figured he was in the 170s, but I was more focused on the shot than judging the rack,” says Morgan. “I had no idea he was anywhere near that big until we came up on him and saw the mass and the splits and sticker points. The main beams were about 22 inches long, which isn’t that long, but the mass is where he got a boost. The smallest mass measurement was 5 2/8 inches. He’d been growing some since the first time I ever saw him.”

Growing enough to provide Morgan with the trophy of a lifetime.

No Such Thing As Too Much Practice

A 45-yard shot like the one Andy Morgan took to harvest his big Nebraska buck might seem like a long distance to some bowhunters, but it’s well within his comfort zone. Morgan prides himself in his accuracy with a bow, and credits his fine-tuned equipment and long hours of target practice throughout the year.

“As much as I practice, I would have been very disturbed if I had missed that buck. A bowhunter doesn’t get a shot at a buck like that every season and you have to be prepared physically and mentally to take advantage of the chance,” remarks Morgan. “For one thing, I tune my bowhunting setup myself and make sure everything works like it’s supposed to. Also, I practice shooting every day if it’s at all possible. I’ll take my bow to [bass] tournaments and try to shoot every evening after I come in, even if it’s just three arrows. It takes my mind off fishing and relaxes me some, so it helps me in more ways than one.”

“It’s never an easy shot when you’ve got a big buck standing in front of you, but having confidence in your equipment and your shooting ability can make things work out sometimes when otherwise it might seem pretty darn improbable.”