Are You Good Enough to Catch Striped Bass from the Surf? 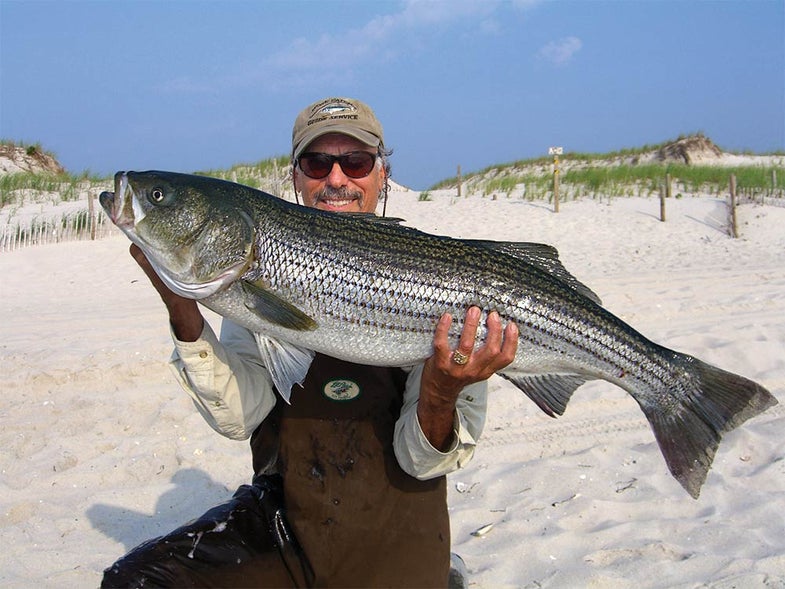 They are easy to spot—dozens of them, silhouetted against the starry night sky, with cold, wet neoprene waders clinging to their bodies. They launch cast after cast from the surf out past the breakers or along rock jetties. They have come for the fall striper run, and the commitment is no joke. From September to December, from Massachusetts to the Jersey Shore, people lose jobs, break commitments, and fall off the grid in the dogged pursuit of striped bass. To them, absolutely nothing matters but the drive to catch a giant striped bass.

Montauk, known as the mecca of striped bass fishing, is where “Crazy” Alberto Knie has spent more than 40 autumns building his reputation as a preeminent striper sharpie. For a surfcaster, a 50-pound bass is considered to be the benchmark fish of a lifetime. Knie has caught 11 bass over the 50-pound mark.

“Geographically, Montauk and Long Island are central to the striped bass migration—all fish pass through the area on the fall run,” says Knie. “Deep water, boulder fields, and the presence of baitfish make Long Island’s North Shore, South Shore, and the Point especially inviting to surfcasters. No matter the weather—wind or swells—you can always tuck in somewhere on the island and find a fishable spot.”

Knie’s secret weapon is really no secret at all, but rather a striper fishing mainstay.

“Bucktailing covers the entire spectrum of bait profiles like squid, lobster, bunker, spearing, and other baitfish,” says Knie. “They are also very durable for working rocky structure. Finally, you can adjust the weights to work different sections of the water column, depending on the tide and current.”

A 1- to 4-ounce white bucktail tipped with a pork rind is Knie’s go-to bait. He uses 10 feet of 80- to 100-pound-test fluorocarbon leader with a 50- to 60-pound-test braided main line. Tactical Anglers (TA) power clips allow for quick lure changes.

“I always use the clips,” Knie says. “You have to adjust to conditions and bait presence, and with them I can switch out the bucktail for a pencil popper, darter, or plug if I see the bites changing.”

Knie bounces the bucktail over the rocks to mimic a lobster or crab, or he retrieves it slowly near structure to exhibit the qualities of a squid or baitfish. Adaptation is key to successful presentations, but even more critical is the mindset, research, and drive of the surfcaster.

“Surfcasting striped bass is primal,” says Knie. “You can plant your feet in the sand and catch trophy-caliber fish, but it’s a commitment that you need to be intimately invested in. Success is directly related to how devoted you are to the pursuit.”

Shell E. Caris is respected as one of the top surf slingers in New Jersey. He has chased bass in the autumn surf for more than 50 years and boasts a personal-best striper of 55 pounds 9 ounces. His home sands stretch from Bay Head, N.J., down to Island Beach State Park, where prime fall-run time hits from Halloween through Christmas.

“Jersey’s fall run is more of a run-and-gun fishery—the fish are continually moving through,” says Caris. “You’ll often have a day or two of activity in one area, but then the fish will shift southward. You can wait for another wave of fish to come through or you can chase them. Having a beach buggy is key to finding them.”

“There are no boulder fields in Jersey,” says Caris. “You need to read the holes, sloughs, deep cuts, and sandbars to find where the fish will trap bait and feed aggressively.”

Although Caris fondly recalls the tin-squid lures of old, his favorite lures nowadays are more contemporary.

“If sand eels are the predominant bait, I toss out Ava jigs or Tsunami Eels and drag them across the sands,” he says. “When peanut bunker are around, the white 6-inch Hogy Paddletail swimmer is my best bet.”

While lures and tactics may change with time, the enthusiasm never varies. The run has a powerful grip on anglers up and down the Northeast coast. And, as they say in New Jersey, “It’s about to go off.”