This time, Curtis Ronning was ready to brawl with the bruin. 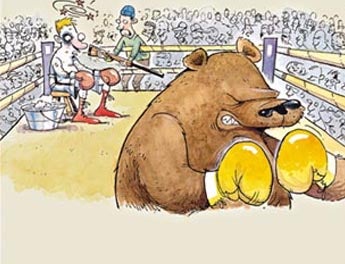 Ever since a black bear slapped him to the ground last summer, Wisconsin resident Curtis Ronning has been a tad nervous about working outdoors. The one-punch knockdown left him skittish to the point where he refused to go out without a loaded deer rifle handy. Smart move.

Some weeks later the bear and Ronning crossed paths again. This time, Ronning was using a tractor to fix a wall on a neighbor’s property when the bear approached. “I thought, ‘Here I go again,'” Ronning told a local reporter. The bear bobbed up and down in front of the tractor growling, but unfortunately for Ronning his rifle was sitting in his pickup truck about 100 yards away.

After a few minutes of this aggressive display the bear turned away, giving Ronning the chance to “run like heck” for the truck. He grabbed his rifle and fired two shots at the bear before the bruin shuffled off. The next day he and his wife found the bear dead in a nearby ditch. The Wisconsin DNR signed off on the shooting, saying the bear was a nuisance animal that had shown a pattern of confrontation. Ronning turned the carcass over to the DNR and says he had no interest in keeping it as a trophy. “I thought, ‘I ain’t going to keep that; I don’t even want to look at it any more,'” he said.