Letters from our readers regarding the May 2003 issue. 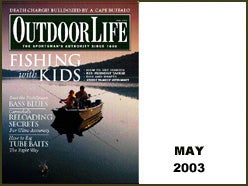 Loved Kids Fishing!
“Fishing With Kids” [BRACKET “May”] hit all the right topics. When you’re headed fishing with children, take them where you’re sure they’ll catch something. Kids don’t care what the fish is and it doesn’t have to be Moby Dick,

either. Take binoculars so they can look at wildlife when they get bored and keep your trips short. Keep the gear simple and remember to have lots and lots of patience. Line tangles will happen and the kids will miss a few bites, but who cares? Just have fun.

Reeking Havoc
I am green with envy that Pat McManus is the one to break the flatulence barrier in outdoor journalism [BRACKET “Last Laugh, April”]. For too long, this subject has been hidden under a cloud (as it were) of disrepute, held in bad odor (so to speak) by generations of writers who were afraid to deal with such a rich and all-enveloping subject. Hats off to Pat, and hold your breath!

Also, congratulations to Jerry Gibbs on his third decade with OL [BRACKET “Editor’s Journal, April”]. I must, however, set the record straight on one point.

Jerry’s neighbor did not pull a newspaper with Joe Brooks’ obituary out of a garbage can-he pulled out Jerry, who was looking for breakfast. They didn’t pay much at True in those days.

** Pack The Frying Pan**
Jim Zumbo’s “Catch & Eat” feature [BRACKET “June/July 2003”] was excellent! More and more it seems we are driven to walk the narrow beam of political correctness (or be prepared to suffer the consequences). It is very frustrating always to have to look over your shoulder and worry about what the next guy is thinking. I have no qualms about the proper management of a species, to protect against abuse or excessive pressure. That’s why we have seasons, bag limits and catch-and-release streams. But the rest should be up to me. If the law says I can keep a fish I catch, why should I have to hide it in order to avoid being verbally abused? And the sad part is, it’s our fellow sportsmen and sportswomen that are doing all the bashing!

We are micromanaged to death as it is, so the last thing we need is to pick each other apart with opinions that take the fun out of our sport. Eventually the next generation won’t be interested in fishing, and that doesn’t bode well for any of us.

We’re planning to take a fishing trip to Montana and Alaska later this month, and guess what? The frying pan is packed right on top.

Simply Wonderful
I just read “Simply, Stephen” by Jim Carmichel [BRACKET “Shooting, May”]. The world’s best writers and musicians are blessed with range. Virtuosos can cover several octaves with ease. In this sensitive and powerful article, Carmichel sings bass by having read Stephen Hawking’s A Brief History of Time and tenor by comparing a once “crimson-gowned,” newly fallen maple tree to Hawking’s Lou Gehrig’s disease.

The “ruby” monarch was Carmichel’s favorite tree…before a terrible storm. During clean-up, he saves the withered remains of the tree and christens it “Stephen.” Like its human counterpart, the plant is still able to whisper its majesty, its powerful murmuring to those who would take notice. It is very rare that a prominent Shooting Editor would possess the profound sensitivity and the intelligence to liken a frail human genius to a “horribly disfigured” yet “determined” tree. Most of his peers are too steeped in spouting caliber-feet-per-second-energy comparisons to notice and then comment on nature’s wonder. Carmichel can analyze data, synthesize similarities and evaluate their contributions.

“Simply, Stephen” now graces a meaningful spot on my wall at home.

** Unnfair Chase**
Maybe it’s time Boone and Crockett took a look at all of its record trophies. In “Record Bear Disqualified” [BRACKET “Snap Shots, May”], B&C; spokesman Keith Balfourd states, “…under the rules of fair chase in our program [BRACKET “the hunter”] wouldn’t have taken the animal without the illegal use of these vehicles.”

Alaska is a very remote place, as are many other hunting areas. Most of the areas where trophy animals are taken cannot be easily accessed without the help of some type of motorized conveyance, whether it’s an airplane, a swamp buggy, an ATV or a tracked vehicle. Perhaps only trophies taken without motorized transportation of any kind should qualify for the record books, as there is nothing fair about taking a motorized vehicle to an area where these animals live.

To David Malzac I say, “They can strip you of the title, but they can’t take away the memories of your hunt.” And that is the most important trophy there is.

Got a Light?
In the May “What’s On Your Mind,” carrying a candle was mentioned as a survival tip. I carry those little tea (or votive) candles. They’re excellent for lighting fires. Even if the wood is damp, simply set one of these candles in your fire pit, light it and then stack the tinder over it. The heat of the candle and the steady flame will dry your tinder enough to get a fire started.

I also never go hunting without a backpack. In it I carry food, drink, matches (stick matches in a medicine bottle), candles, a first-aid kit, a space blanket, rope and (lashed to the outside) one of those Army rain ponchos.

So far, I have never needed any of these items, and I hope I never do.

CORRECTION
The number listed for Savage Arms in the 2003 Gun Test (June/July) was incorrrect. The correct number is 413-568-7001. We regret any inconvenience this may have caused.