Readers respond to our June/July and August 2003 issues. 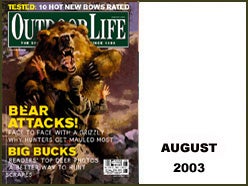 Kudos to Zumbo
I could write a book on the topic of catch-and-release, which was covered by Jim Zumbo in his article “Catch and Eat” [BRACKET “June/July”], but I will keep it short. Fish are super-sensitive creatures. The general consensus is that a fish can stay out of water for the same period of time a human can stay underwater, which isn’t very long.

In the late 1960s or ’70s, the Wyoming Fish and Game Department conducted an extensive study on the catch and release of trout. If my memory serves me correctly, the study showed that once a trout is touched and its film (slime) is tampered with, it will eventually die.

Fish are sensitive, especially walleyes and trout. Picture this: two largemouth bass holding a fisherman underwater by his legs and clicking off 10 or 15 shots with an underwater camera, then releasing him on land and performing mouth-to-mouth resuscitation to get him started again. It would make a good cartoon.

I would rather eat the fish I catch than see it floating belly-up a few days later. There is only one way to release a fish with assurance that it will live, and that is to cut the line or remove the hook while the fish is still in the water.

Can Grizzlies Climb?
In “Bear Attacks!” by Christopher Batin [BRACKET “August”], there’s a section that gives tips on how to avoid an attack. Tip #8 states that bears climb very well.

I read another article somewhere that said that although black bears are great climbers, grizzlies do not climb well, if they climb at all. I don’t live where there’s any danger from grizzlies, but I’d like to know if this is true.

_Jim Zumbo replies: Black bears are expert climbers, but grizzlies are poor climbers up a slick tree because of their very long claws, which preclude them from getting a good grip. However, if a tree has numerous strong branches, a grizzly can climb it by using the limbs to haul itself up.

If I wanted to elude a grizzly, and I had the time and a choice of trees, I’d pick one with skinny, sparse branches that would withstand my weight but not a grizzly’s._

Defining Brace Height
In the article “Bow Shootout 2003” [BRACKET “August”], Bill Winke states, “Brace height is the space between a bow’s nock point and rest while a bow is not drawn.” Having recently tuned my bow, that did not ring true to me.

Bill Winke replies: Excuse me for a definitive slip. You are exactly right.