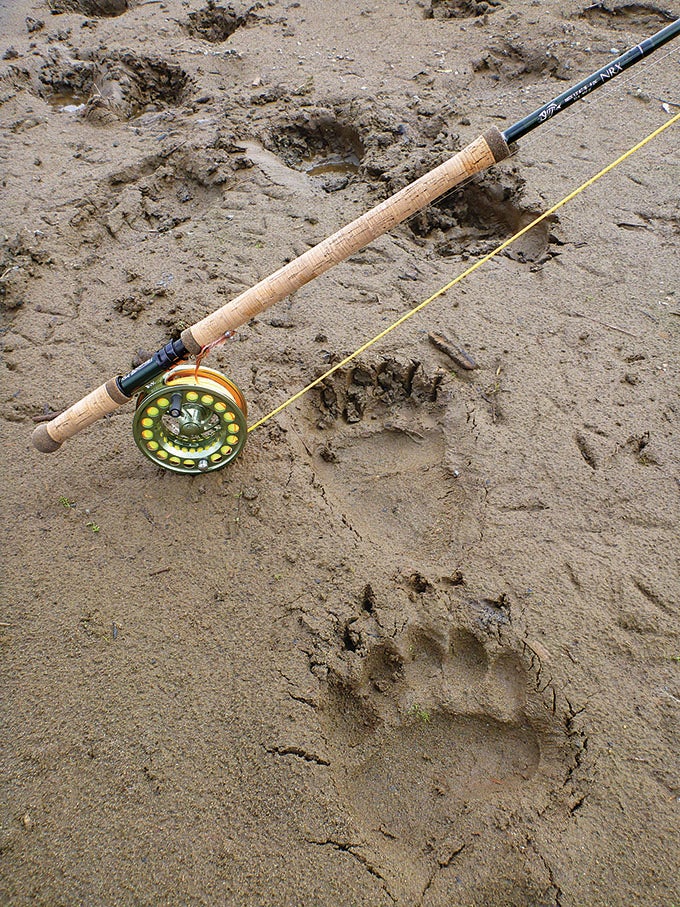 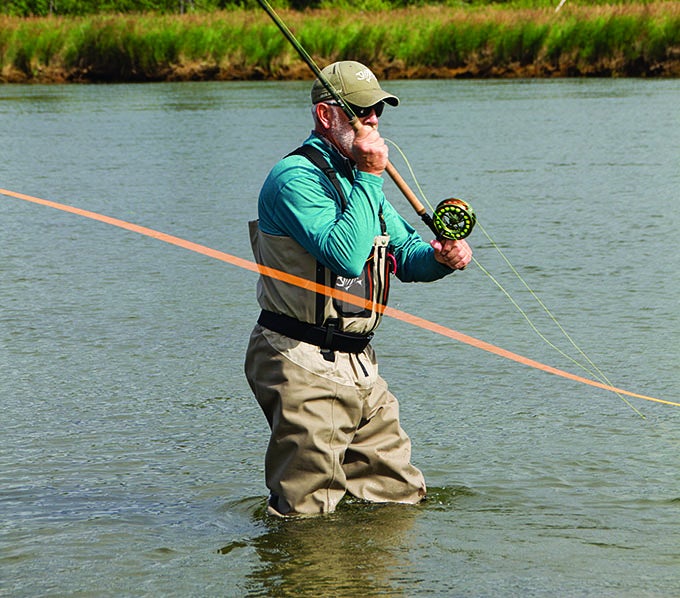 “If a bear pokes his head out of the brush, just holler at him and he’ll run off,” said Tom Haugen as I stepped out of his boat and into southern Alaska’s Alagnak River for the first time. Tom had instructed my three cohorts and me to spread out up and down the bank, but I decided to not venture too far from the boat. Having touched down on the gravel landing strip behind Katmai Lodge just three hours earlier, I figured it’d be a shame to have come all this way only to get dragged into the bush by a brown bear before I caught my first fish.

After a while, Tom came by to see how I was faring. I’d hooked up with a couple of chum salmon and managed to bring one to hand. Still thinking about the bears, though—and with so many enormous paw prints along the sandy bank, how could I not?—I asked Tom what kind of grizzly medicine he carries in his boat.

“I don’t,” he said before taking a drag on a Marlboro. When I realized those words weren’t going to be followed by “…leave the dock without my 870” or something similar, I asked why not. “Never have. We have nice bears here. Wouldn’t hurt a soul.” And off he shuffled downstream to see how my buddy Bruce was doing. I shrugged and made another cast. Who was I to argue with a man who’s been guiding on the river for 30 years? And with five days of fishing for salmon and rainbow trout in the Alaskan wilderness ahead of me, I knew I was better off just going with the flow. 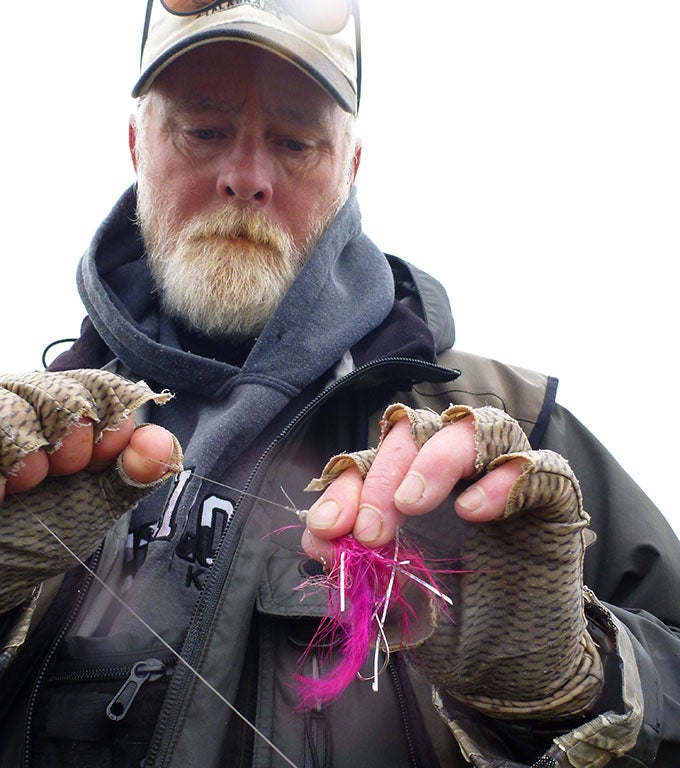 Mistakes Aplenty
In the local native language, “Alagnak” means “making mistakes.” The river got its name for its many meandering braids upstream toward its headwaters—Kukaklek and Nonvianuk lakes in Katmai National Park and Preserve. “According to a life-long area resident, ‘The channel is always changing, causing mistakes and getting lost,'” I read in a dusty old National Park Service publication I found in the lodge. A couple of days later, as I stood in thigh-deep water at a bend near a stretch called Tin Shack, I was making plenty of mistakes of my own. I’d like to blame my horrendous casting on the raw, strafing winds and pouring rain (“Coldest day of the summer,” Tom cheerily informed us during our streamside lunch break), but the fact of the matter is I’m not a very good fly-caster, even in less propitious conditions. So as my pals hooked up with late chums and early silvers up and down the river from where I stood, beating the surface to a froth, Tom took note of my struggles and waded over.

“Here, try this,” he said and handed me one of the G.Loomis PRO4x switch rods Bruce had brought. All along, I figured that I’d graduate to spey casting once I’d become more proficient with my fly-casting. But after a brief tutorial, and to my pleasant surprise, I was soon shooting 60 feet of line like an old pro.

The Art of Spey
Spey casting is a two-handed technique believed to have originated on Scotland’s River Spey in the middle of the 19th century. It’s an ideal method for fishing tight quarters that don’t allow for long back casts. There are a number of differences between spey casting and traditional fly-casting, but the two biggest concern equipment and technique. 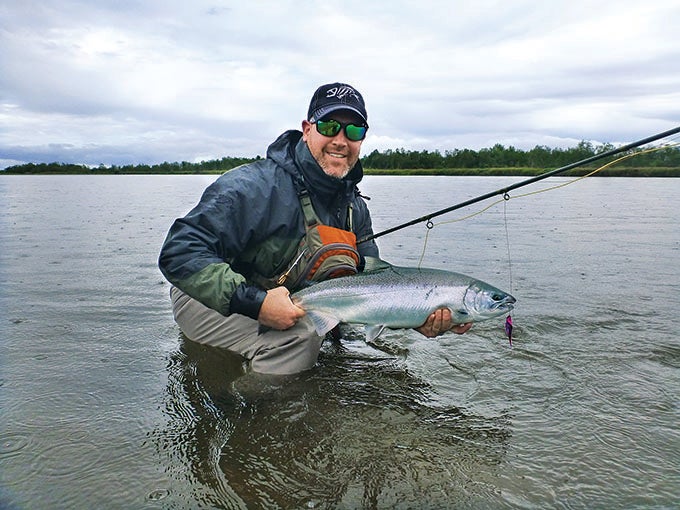 First, spey rods are typically quite a bit longer than standard fly rods—anywhere from 12 to 15 feet—with a second handle aft of the reel. Second, rather than making false casts when presenting a fly, you strip nearly all the line you’ll want to cast off the reel ahead of time and let it be carried downriver by the current. Then, depending on which way the current is flowing in relation to the direction you are facing, a series of two or three sweeping motions with the rod shoot your line and fly to the intended target. Entire books have been written about spey casting, so there’s quite a bit more to it, but that’s the gist.

As our week on the Alagnak neared its end, the once-ornery chum salmon slid aimlessly through the water like finned zombies. However, more and more wild, acrobatic cohos arrived to replace them, many of them so fresh from Bristol Bay that they still had sea lice attached to their sides. They were more than willing to chase purple articulated leeches stripped through riffles and slurp pink polywog patterns off the surface. On our last morning, Bruce landed an incredible nine silvers on a dry. After each, he’d break into song: “I go wogging after midnight…,” “I wog the line…,” “I’m wogging on sunshine….” Fifty yards downstream I continued to work on my cast and smiled to myself, knowing that his off-key warbling would at least keep the bears at bay.

No roads lead to Katmai Lodge, but daily charter flights from Anchorage will get you there and back.Sleeping quarters are spacious, warm, and comfortable. Hearty and delicious buffet-style breakfasts and dinners are served in the dining hall; lunches are prepared streamside by the guides. Prior to dinner, a happy hour is held in the main lodge, with beer and wine and the best smoked sockeye you’ll ever taste.
All-inclusive packages (not including airfare) start at $3,450. —J.T.