Saint Hubert is the patron saint of hunters, and I took Hubert as my confirmation name. My wife bought me... 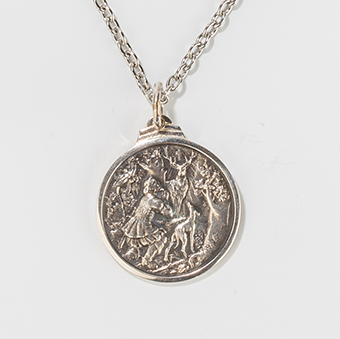 Almost on cue, a 160-class whitetail came meandering down the same trail to scent-check the does, and I was in business. As I attempted to attach my release to the string, it got caught in my glove, causing me to panic a bit. I freed the release and managed to clip it to the string, but in my frenzy I failed to step to the front of my stand. Despite getting drawn, I didn’t have enough room to maneuver. When I recognized the issue, I made a clumsy attempt to back up, and in doing so I bumped my release, sending my arrow into never-never land.

We were both shocked! The deer disappeared into the woods, and I nearly burst into tears. I hadn’t seen that buck before that morning and I never saw him again, despite having a half-dozen cameras in the area. Standing in the tree cursing myself, I recalled my decision to not retrieve my medallion necklace that morning after forgetting it in my bathroom the night before.

Despite a long search, I couldn’t find my arrow, and in some ways it’s like the incident never happened. I think someone was sending me a message, and I heard it loud and clear. The medallion has now become standard equipment in my hunting kit.