For many generations, Oklahomans have been doing their catfishing with nothing but their bare hands. 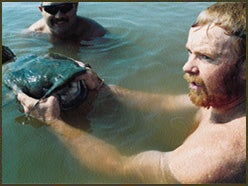 When Lee McFarlin’s dad first took him noodling, he gave Lee a simple assignment. “Son,” McFarlin remembers his father, Arthur, saying, “just stick your foot in that hole and don’t let that fish out.”

The assignment, McFarlin concedes, is pretty much the same as the one he has just given me.

At the moment, I’m shoulder deep in the silt-choked shallows of Lake Carl Blackwell, a dingy, man-made water hole in northern Oklahoma. With my chest pressed against the edge of a boat launch and my appendages wedged into various underwater openings, I’m doing my darnedest to ensure that the shovel-nosed brute that McFarlin, a plumber by trade, and his buddy Doug Hutch-inson have trapped under the launch does not escape.

“Now when your daddy says, ‘You either block it or else,'” remembers McFarlin, drops of water raining off his tangerine-colored beard as he lets the last line hang in the air, “that fish ain’t gettin’ by you.” McFarlin grins. Hutchinson giggles. I ball up my fingers and hope they don’t look too much like catfish bait. “Just remember,” McFarlin tells me as he resumes probing the opaque waters with his hands, “a noodler’s worst enemy is a good imagination.”

Occupational Hazards
Right around Memorial Day, when the sun bakes the wheat golden brown, catfish seek out the warm shallows of Oklahoma’s lakes and rivers to spawn. After the females lay eggs, the males stand guard over their incipient offspring. If you’re a noodler, this is the moment you live for.

A rare and, some would say, crazy breed of fisherman, noodlers (or, if you prefer, hoggers, doggers, thumpers, grabbers, grapplers or grabblers) stalk their prey, the egg-guarding male flathead catfish, armed only with their hands, an encyclopedic knowledge of local fishing holes and a general sense that everything will work out in the end. “I’ve been doing this since second grade,” McFarlin tells me as he waves 10 fingers in front of his face, “and they’re all there. Count ’em.”

We’re slapping mosquitoes and nursing sweaty beers at the Okie Noodling Festival in Pauls Valley, Okla., where a dollar will get you your picture taken with a gigantic flathead and two dollars will get you, well, two pictures of you with two gigantic flatheads. The festival is the closest thing the sport has to a Super Bowl, and believe me, it’s not very close.

While scores of freshly noodled flatheads (the only type of cat that can be legally taken by hand in Oklahoma) await the deep fryer in holding pools outside of Bob’s Pig Shop, McFarlin and a few pals are explaining some of the occupational hazards of catfish grabbing. For starters, catfish lay their eggs in some of the darkest, most godforsaken nooks and crannies imaginable. Underneath brush piles. In submerged oil drums. Or maybe at the bottom of a deep hole only a sliver bigger than the circumference of your arm. “You’ll go in, you’ll be after that fish, you’ll twist around and all of a sudden”-McFarlin makes a whooshing sound-“you’ll be out of air. And then you’ll realize your arm’s stuck.”

Of course, when you’re probing dark recesses at the bottoms of lakes and rivers, catfish may not be all that you find. “Once I got hold of a big old thirty- or forty-pound loggerhead turtle,” says Danny King, a veteran noodler with a plum-size plug of tobacco in his cheek. “I thought I had him turned with his head facing away from me. But when I pulled him up above the water, his head was facing me. Well, he stuck his neck out and bit my bib coveralls. But he didn’t get any of the meat on my leg or anything.”

Even if you’re fortunate enough to avoid the turtles, beavers, snakes and alligator gar, that still leaves you with one more big problem-the catfish themselves. Needing only a few feet to accelerate, smaller cats can deliver lung-emptying blows, while bigger ones can knock a man clean off his feet and crack a few ribs in the prrocess.

As far as anyone can tell, the sport’s name derives from the fish’s smooth, scaleless skin. “That son of a gun is like a wet noodle when you try to catch him,” says McFarlin, “just slimy, slippery.” Consequently, a noodler lands a catfish by wedging his thumbs into the corners of its mouth and hooking his fingers up under the gills. So long as you keep your thumbs lodged in the crook of the fish’s maw, McFarlin explains, you’ll avoid the countless minuscule teeth that carpet its jaws.

While no sharper than heavy-grade sandpaper, the legions of inward- facing teeth can spell big trouble for noodlers. If a cat manages to clamp down on your hand-or worse, your arm-the fish metamorphoses into a barbeled buzz saw, gyrating wildly as it attempts to strip the meat from whatever offending appendage it has between its mandibles. At best, you’ll lose a little flesh in the encounter. At worst, McFarlin tells me moments after I’ve agreed to join him on a noodling expedition, you’ll drown.

“It’s All Noodlin'”
At first, my noodling baptism goes fine; it’s all empty holes and long-winded stories. But when Hutchinson homes in on a flathead lounging under a boat launch, I find myself nervously scrambling to the side of the launch to serve as human caulking, my body plugging any potential escape route.

While McFarlin and Hutchinson probe unseen recesses beneath the launch, I try to clear my head of every noodling tale I’ve heard. Ten, I say to myself. Ten. As in, I will have ten fingers when I leave this lake. Mercifully, Hutchinson soon manages to get ahold of the cat’s tail, then immobilizes the fish with a bone-crunching squeeze. McFarlin works his hands up under the fish’s gills, jams his thumbs into the crooks of its mouth and eventually strings it. After shoving my fingers into the flathead’s maw for a brief, cautionary lesson-“See how them teeth could rip you to shreds?”-he yanks tomorrow’s fish fry from its refuge beneath the launch.

Back at his house, McFarlin is introducing me to his pet bobcats when the phone in his den rings. Seems that somebody needs a line unclogged. Lee McFarlin, plumber, to the rescue.

“So much for your Saturday night,” I say. But McFarlin just grins. “One way or the other,” he says, “it’s all noodlin’.”