When Yankee bass play hard to get, it can pay to go dixie on them. 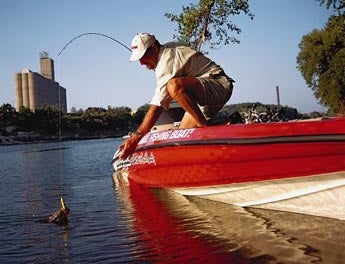 As we trolled around Cedar Lake on a gorgeous August morning, Scott Lambert suggested several options for fishing the 1,100-acre waterway’s docks and shoreline laydowns.

“Topwaters, crankbaits and spinnerbaits are typically good, although around the docks I like to pitch jigs or tubes because the docks are the main cover in the lake,” said Lambert, who lives in Jordan, Minn. The tournament angler and guide regularly fishes Cedar, Spring, Prior and other smaller bass-filled lakes near his Scott County home. “Because the bottom is primarily gravel and rocks, tubes and jigs that imitate crawfish or smaller panfish work really well.”

Having never been to Minnesota to fish, I asked several local anglers about lure possibilities prior to my trip. Most of the advice was to downsize to smaller offerings such as 1/8-ounce jigheads with finesse worms or Â¼-ounce jigs. Those might work in the creeks or streams of my native Alabama, but for a Southern boy they ran counter to my typical bass setups of ½- or Ã‚Â¾-ounce sizes-or larger-for fishing on weed-choked Southern impoundments such as Guntersville, Eufaula, Seminole and Toho.

After 30 or 40 minutes of throwing a Spook Jr., I asked Lambert if he had anything along the lines of a ½-ounce black-and-blue jig, or some ½- or Ã‚Â¾-ounce slip sinkers and a 4-inch tube. His eyes lit up as he dug around in his tackle boxes. I selected a green pumpkin Vibra King tube and matched it with a 3/8-ounce Excalibur Tg tungsten sinker, along with a ½-ounce black-and-blue Booyah jig.

“Man, if you like to pitch,” Lambert said, beaming me a grin as he put his trolling motor on high to move to the next line of docks, “we’ll have a heck of a time today.”

Mighty Fine Pitchin’
For the next several hours we had a slugfest, dissecting docks, pulling out largemouths weighing up to 4½ pounds, and missing several more in the 5- to 6-pound range. It was simple power fishing, nothing more than choosing a likely target, making an accurate cast and staying focused to set the hook and extract the fish. A strong forage base anchored by crayfish, shad and bream support the bass, muskies and northern pike.

It didn’t matter where we put our baits-in the shady spots under walkways at the shoreline, on the corner posts, between docked boats-because on almost every dock there was at least one hungry bass that would put up a fight. Though sometimes, getting the fish out of the water was a battle.

[pagebreak] Lambert explained that the winter-proof metal docks “make fishing tougher because sometimes you’re going to get broken off by a fish sawing the line against a piece of metal. You check your line and retie a lot. But that’s part of it. The fish are under the docks, and you have to put the baits where the fish are hiding.”

For heavy action, Lambert typically spools up with 25- or 17-pound-test Silver Thread line on a G. Loomis flipping stick and opts for a few basic lure colors: red shad, green pumpkin, black-blue and watermelon. He favors a 3/8-ounce Excalibur Tg tungsten sinker, secures it with a plastic peg and inserts rattles in the tube.

On the River
The day before Lambert and I hit Cedar Lake, I joined pro angler Curt Samo of Creston, Ill., on the Mississippi River between Minneapolis and St. Paul to try to pick up some largemouths and smallmouths, both of which flourish in the system.

We locked through Dam No. 1 on the river and began targeting cuts, shallow gravel bars, laydowns and rocky banks. Although everyplace we stopped looked inviting, the bite was tough and we struggled.

An old bridge truss covered in graffiti proved to be a winner. Logs and limbs had piled up around part of the toppled rocky support, and a sandbar dropping into a scour hole on the downriver side looked especially good. My smaller baits kept drifting away in the current, though, so I resorted too my Southern instincts again.

A tube or worm, unless rigged and pegged with a big sinker, wouldn’t get to the bottom in the current, and the slack water was too shallow on top of the gravel bar. A crankbait might work, but these were close quarters; the targets were a short pitch away. Rummaging around in Samo’s jig box, I found and tied on a ½-ounce green pumpkin Booyah jig with a matching Yum chunk trailer.

The fish thumped the jig when it hit the bottom of the scour hole. I missed two bites, then on a hunch turned and pitched the jig to the trashy logjam on the other side of the boat. I landed a feisty 2-pound largemouth. After another bite Samo picked up a jig he had tied on. A few more fish couldn’t resist and were hauled in for examination.

We decided to lock through the dam and head downriver toward St. Paul, where Samo stopped below an old railroad bridge. Water was coursing around the rocky support and over a gravel bar. It created a perfect scenario: a hard-bottom feeding shelf of shallow water dropping into deeper water, with current and structure to attract and hold baitfish and bass.

Bass occasionally whacked minnows in the small eddy behind the current break, which is where Samo and I cast our Spook Jr. and Pop-R topwaters. We noticed fish also feeding in the current rip over the deeper edge of the bar. Patience prevailed and Samo hauled in a 3-pound smallmouth that couldn’t handle watching his topwater bait sashay overhead.