Focus your winter fishing trips along the South's big rivers for monster blue catfish over 40 pounds. 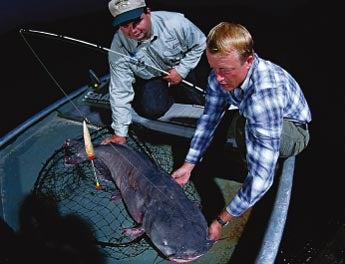 Wintertime trophy hunting often brings to mind thoughts of whitetail deer, but it’s also one of the best times of the year to catch monster blue catfish that will amaze your friends and put your angling skills to the test.

Big blue cats head to deep water in winter, so they’re often easier to locate. Catching them is another matter. You might get one bite all day, you might get 5 or 10. But if the stars and planets line up just right, you’ll be tangling with the fish of a lifetime.

“It takes a commitment,” says Lake of the Ozarks guide Jeff Williams. “A lot of people can’t buckle down and fish for two fish a day. But if someone wants to come to fish for big ones, that’s my kind of guy.” On rivers, deep holes attract and hold big catfish. Not only do they provide ambush points, but the water temperature is more stable than near the surface, where air temperatures, wind and current cause it to fluctuate.

Big cats typically stay put in winter, instead of roaming around shallow areas as in spring and summer. On rivers such as the Cumberland or Tennessee, look for depths of 40 to 60 feet where there are natural depressions, or scour holes in river bends.

“The Cumberland River produces some awesome catfishing during the winter months,” says longtime guide Warren Byrd, who primarily fishes on Lake Barkley in western Kentucky. “Once you find an area with a big cat in it, chances are there are several more there. One hole could pay off day after day.”

The Big Four
The Tennessee and Cumberland rivers flow through Alabama and Tennessee, joining the Ohio before it dumps into the Mississippi. All four are legendary waterways due to their structure, cover, gravel bars, mussel beds, channel drops, snags and tributaries. They also have stable forage bases of threadfin shad, gizzard shad, skipjack herring and crayfish.

World-record blue cats have come from the Mississippi and Tennessee rivers. Keith Floyd, a fisheries biologist with the Alabama Department of Conservation and Natural Resources, says the unpressured catfish population and its great habitat helps the Tennessee River solidify its stature as one of the nation’s best.

“You’ve just got good habitat,” Floyd says. “You have a high fertility level, which in turn produces a large forage base. There is everything there that a fish will want.”

Byrd targets big cats from late October through March, when water temperatures begin to cool rapidly. After locating a hole, usually around 40 to 60 feet deep, he anchors about 50 feet upriver so his baits will drift back. He fishes four rods with oily skipjack herring, using the fillets, head and guts for a sizable presentation. Two lines are cast to the edge of the hole for aggressive fish, and two are cast directly into the hole.

“A normal day will produce catfish in the twenty- to fifty-pound class,” says Byrd, who has caught blues weighing more than 80 pounds. “I would say we get four to six big bites a day, but you have to remember that we’re targeting trophy catfish.”

[pagebreak] Reservoir Cats Prowling
On large reservoirs where current isn’t a factor, such as Lake of the Ozarks in central Missouri, catfish will follow schools of bait in autumn and winter. Trophy cats hang below the schools, mopping up scraps left by smaller fish or shad that are dying due to the drop in water temperature.

Guide Jeff Williams begins targeting these fish when water temperatures drop below 50 degrees, usually in mid-November. He uses chunked gizzard shad, which dominate the forage base, and relies on his Lowrance sonar unit to locate structure anywhere from 20 to 75 feet deep.

“In a reservoir, the fish move continuously because there’s no current to hold them in an area,” Williams says. “They will dominate an area such as a ledge, a stair step on a ledge or a brush pile. But if the forage leaves, tthe fish will leave in a hurry.”

Williams applies two strategies in winter. With a little wind, he will drift gizzard shad fillets near a flat where there is an active school of baitfish suspended halfway off the bottom. If there is no wind, he will anchor near channel basins or deep holes with nearby structure such as a ledge or dropoff. Then he’ll cast his baits at different depths to see which one produces.

“More than once, I’ve seen the same rod get hit over and over because that bait is going to the one specific depth where they’re feeding,” he says. “This can change from spot to spot all over the reservoir, so you have to home in on the subtleties. What may work in one spot may not work three miles away.

“Where the Lowrance tells me the structure is, that’s where I’m fishing. These fish are going to change on you just about every day and you have to pay attention to where the first bite comes from.”

Williams targets fish in the 30- to 60-pound range, trying to eliminate smaller fish by using bigger baits. He also uses Driftmaster steel rod holders to keep his rods secure. “If you don’t have a good rod holder, your rod will be out of the boat.”

Big Fish, Big Tackle
Targeting trophy catfish isn’t like sitting on a bank catching squealers for a weekend fish fry. It takes big gear and tough line to pull in fish weighing more than 40 pounds. More than likely, too, you’ll be hauling them out of river holes over 50 feet deep. That means your equipment needs to be able to hold up for a long fight. Big blue catfish won’t just swim up to the surface, they’ll play a hard game of tug-o-war.

Barkley Lake guide Warren Byrd uses Quantum Big Cat rods with Penn 309 reels, spooled with 40-pound-test Berkley Big Game line, a 100-pound-test swivel and an 8/0 Gamakatsu Octopus hook. Depending on the current, use a 3- to 6-ounce lead sinker. On Lake of the Ozarks, guide Jeff Williams opts for a 7-foot Shakespeare Tiger spinning rod with a Pflueger 7550 Contender reel, spooled with 30-pound-test superline.

He Carolina-rigs his setup, using a heavy swivel, 2 to 4 ounces of weight, depending on the depth, and a 2-foot leader of 50-pound-test monofilament. Williams uses filleted or chunked gizzard shad on a Daiichi Circle Chunk Light 7/0 hook.