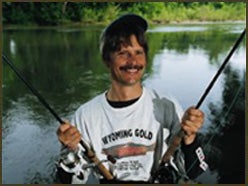 If it has fins, Danny Kurttila probably has caught it. The holder of over two dozen line-class records for species ranging from chain pickerel to mountain whitefish, Kurttila has been crowned the first-ever Trout Royal Slammer by the International Game Fish Association (IGFA). He earned the title earlier this year by catching, and photographing, all eight recognized trout species.

Kurttila, who recently moved to Nashville from Wyoming, caught most of his slam in the Cowboy State. His brown, rainbow and cutthroat trout all came from the Wind River. His brookie came from Western Nuclear Pond, and his lake trout was caught in Lake Hattie. His golden trout came from Thumb Lake in the Wind River Mountains, and his splake came from Ring Lake. Only his tiger trout, a hybrid of brook and brown trout, was caught elsewhere, in Utah’s Huntington Reservoir.

Chasing line-class behemoths is fun, says Kurttila, but he’d rather seek diversity. “My angling has always been about catching as many different species as I can,” says the construction worker. “I’m always looking for the greatest number of fish species.” Kurttila spent about a decade accumulating all the species for his Royal Slam.

The most challenging, he says, was the golden trout, because it lives in remote, gin-clear alpine lakes and because it’s a temperamental biter. “A golden of any size is an accomplishment. It took me a few trips to learn them, and those weren’t easy trips. Most of those lakes are above 11,000 feet, and a lot of times I was plowing through snow up to my hips, just so I could be the first angler in there,” Kurttila says.

A few times he hiked miles into a lake only to discover it was iced over-in July. “On those first hikes, I took a little bit of everything: Mepps spinners and spoons and crankbaits and big jigs and bait. I discovered real quick that if you’re using big stuff, you’re wasting your time with goldens. They’re like muskies, they’ll follow but they won’t bite. I finally learned that you have to jig with little micro icefishing flies and mealworms, and if you keep it in front of them, sooner or later they’ll hit.”

Trout have earned Kurttila recognition, but they’re not his first piscine love. “I’d rather fish for tiger muskies than for any other species,” he says. “I haven’t found anything in fresh water that fights like them.”

Now that he’s living in the Southeast, Kurttila has his eye on another first: accumulating the seven species in the still-vacant Bass Royal Slam. “I’m only missing the shoal bass,” he says. “And I have to get a picture of a rock bass.”