Hassle-free trout by the thousands 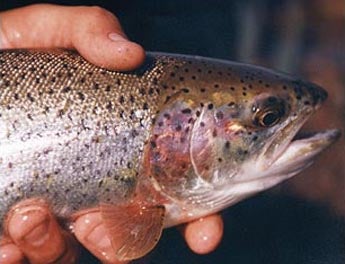 Nearly 3 million people visit Yellowstone National Park every year, and I bet I’ve glared at half of them. I’ve swerved when they’ve suddenly braked in front of me to ogle an elk. I’ve honked when entire suburban families have walked obliviously across the road, cameras glued to their brows, to film a buffalo. And I’ve cursed when otherwise coherent citizens have lined up, paparazzi-style, along a highway to hector a moose or a bear.

If you need a tonic for the human- induced aggravation, wet a line in any of the park’s rivers, streams or lakes. They’re surprisingly uncrowded.

Of those 3 million annual visitors, fewer than 3 percent buy fishing licenses. The rest don’t know what they’re missing. From small back-country streams teeming with naive cutthroats to big rivers that will test your wading and casting abilities to the best subalpine trout lake in America-Yellowstone Lake-the park will reward anyone vigorous enough to string a rod.

Come for the June 15 Yellowstone Lake opener or the Yellowstone River opener on July 15. Hike up Slough Creek and skate a grasshopper imitation across a beaver pond or try to catch an arctic grayling on the Lewis River. Cast a spoon from the shore of Heart Lake for a speckle-backed lake trout. Drift a mayfly nymph in the thermally heated Firehole River. But leave your bait and your lead at home; both are prohibited in the park.

Yellowstone Park explodes the myth that flyfishing is for technically proficient Zen masters. I’ve seen novices catch their first trout on cheapo rental gear and watched callused old catfishermen from Alabama admire a copper-and-scarlet cutthroat before slipping it back into the water. What’s even better, you can drive to most of the park’s best waters and don’t have to hassle with hiking-boot blisters, back-country permits or bears.

Best Baits
The West is full of these accessible, generous trout fisheries, and you don’t need a guide or even fly gear to be successful on many of them. Instead of drifting tiny nymphs on Utah’s fabled Green River, try twitching a rainbow-imitating Rapala. Bring a spinning outfit to the Colorado River below Glen Canyon Dam in northern Arizona and hang a flashy spinner in the deep seams for red-rock rainbows. Grasshoppers attract big browns on Montana’s Bighorn River, but if all you have is bass gear, try fishing a hopper pattern with a casting bubble.

On other waters, July is the month when odds tilt toward anglers. Browns that snub most fly patterns the rest of the year will shed their inhibitions and assault a goofy-looking Chernobyl Ant on Idaho’s Silver Creek. In Colorado’s North Park, trout that would spook at a spinner other times will whack Panther Martins and squirrel-tailed Mepps on the Delaney Buttes lakes.

Monster Bass
Other species get a little wary by the middle of the summer. California bass are in deep water, or feeding at night, so think drop-shot rigs and obnoxious, noisy topwaters. Go deep on Irvine Lake, Lake Piru and Perris Reservoir. Largemouths are still spawning on many northern lakes. Sight-fish for shoreline bass on Lake Sammamish outside Issaquah, Wash., Hauser Lake in Idaho’s panhandle and Noxon Reservoir in western Montana.

Most Western walleyes are shunning night crawlers in favor of leeches and minnows. Big-bug spots include Holter and Canyon Ferry lakes near Helena, Mont., Wyoming’s Glendo Reservoir, the string of South Platte River reservoirs in southeastern Colorado and Rufus Woods Reservoir on the upper Columbia River in Washington.

Though Yellowstone Park’s visitors generally aren’t the West’s most savvy trout anglers, they’re among the most successful. According to the latest fishing information from the park, visitors catch about one fish every hour. The average cutthroat, the species most frequently caught, measures over 14 inches. That’s a great fish. So instead of casting aspersions on fellow travelers, the next time you visit America’s oldest national park, try casting a high-floating mayfly imitation.