Faces in the Field: Kynan Donovan

His dad's invention helps him bowhunt. 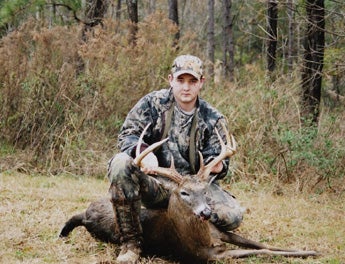 Kynan Donovan, 18, of Guntersville, Ala., was born with only one hand. That hasn’t stopped him from becoming an effective bowhunter.

Donovan grew up fishing and hunting, but it looked like bowhunting might elude him since it usually requires two hands. That changed when his father, Dan Donovan, a NASA machinist, came up with the concept of a sleeve that his son could slip his arm into to hold a bow, drawing the string with his good hand.

A prosthetics company wanted $1,500 to build the device, so Dan fashioned it himself with pantyhose and fiberglass resin for about $30. The sleeve is attached to Kynan’s bow with a metal bracket.

Kynan quickly mastered archery with it and soon began hunting and shooting 3D tournaments. “He’s a natural,” his father says. “He shoots better with one hand than I do with two.”

Kynan has been bowhunting for four seasons now and has arrowed two deer, a wild hog and a bobcat. He still hunts with a firearm sometimes but prefers the challenge of bowhunting.

He has his sights set on even warier game, hoping to eventually bow kill a mature gobbler. “I got to draw on some last year but didn’t get a shot,” he says.

When he’s not in the field hunting, Kynan is a pre-engineering college student who works part-time for a lawn service.