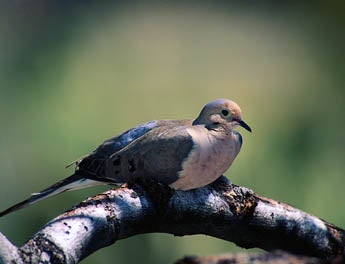 The California Department of Fish and Game is now offering Golden State hunters a golden upland-gunning experience with a unique program designed specifically for dove hunters. But you’ll have to act soon to apply for a permit that will grant you some of the finest and fastest dove hunting anywhere.

Exclusive properties
In the tradition of federal and state waterfowl-hunting programs, the department has set aside special properties in California’s vast central and southern farming valleys for dove hunters. The properties have been planted with safflowers or sunflowers to draw birds in and hold them in huge numbers for gunning that cannot be beat, even on private land.

West Coast doves migrate south through California’s Central Valley until, by the September 1 opener, hundreds of thousands of the quick little birds populate the southern Sacramento and San Joaquin valleys all the way to the border with Mexico. California shotgunners take between 1 and 2 million doves each season, the bulk of which are mourning doves. Some whitewings are shot in the southeastern corner of the state.

Although some birds migrate into California from southern Oregon and western Nevada, the majority are hatched and raised within the state, supported by its 500-mile-long farming valleys and their enormous seed crops, both planted and wild. According to upland bird biologist Tom Blankinship, the state’s dove population hovers around 20 million. It’s a testament to the bird’s ability to survive the region’s long, dry, rainless summers. State harvest numbers show doves to be the top bagged game birds, eclipsing even waterfowl species.

Liberal limits
California’s dove limit has remained the same for years: a generous 10 birds per day per gun. Even more generous is the state’s long season, which runs September 1 through 15, closes until the second Saturday in November and then remains open until December 23.

The Department of Fish and Game has set up these special hunts on a reservation basis and makes applications available by late June or early July. The exact timing is up to the discretion of the department, so it would be a good idea to call ahead of time. Reservations are for opening day only in most areas. After that, hunts are conducted on a first-come, first-served basis. Contact: California DFG, 916-653-7664, www.dfg.ca.gov.