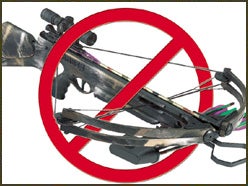 There’s a fight going on in some of the biggest deer hunting states in the U.S.-Pennsylvania, Michigan, Maryland, Virginia, Alabama and New York among them. It’s not the great gun debate or the battle against anti-hunters. This argument is pitting hunter against hunter. The question is: Should restrictions on crossbows be loosened for the general hunting seasons?

If this year is any indication, the pro-crossbow movement seems to be gaining momentum. First, Wisconsin passed a law that allowed any person 65 years or older to hunt with a crossbow during the regular archery season. Then it liberalized restrictions for a number of counties, mainly around heavily populated cities such as Philadelphia and Pittsburgh. But the biggest news came from Georgia, which became the first state in nearly 25 years to legalize crossbows for non-handicapped persons during the archery season, thus joining Arkansas, Wyoming and Ohio as the only states that currently recognize crossbows as bowhunting gear. Only six states regard the crossbow as an illegal hunting tool for any person, in any season. And virtually all the rest have legislation that allows crossbows to be used during the firearms season or during the archery season by the physically impaired.

Some states are exceptions. South Carolina, for example, allows crossbows in certain areas in the general archery season; Indiana allows them during the late season as a means of harvesting antlerless deer. But all that’s changing, and plenty of people, specifically a large contingency of state and nationally sponsored bowhunting groups, are none too happy about it.

Although the crossbow is centuries older than the long bow (it was first used by the Chinese as early as 300 B.C.), the controversy surrounding its place in the hunting season is reminiscent of the struggle during the early 1970s to gain acceptance for the compound bow. Emotional outbursts, misconceptions and the propagation of myth fuel the opposition, which makes such claims as 1) crossbows are poacher’s tools; 2) crossbows are not safe; 3) crossbows are long-range weapons that are deadlier than modern compound bows; and 4) crossbows will decimate deer numbers.

To find the truth, some game department officials are looking hard at data provided by states where crossbow hunting is unrestricted during the archery season. The use of crossbows doesn’t threaten deer herds, said one biologist, because annual deer harvest reports show that in spite of liberal seasons in many areas hunters simply don’t kill enough deer, especially in urban areas where firearm hunting is impractical. So despite a vocal opposition, some wildlife managers see the crossbow as a practical and untapped management tool. Which raises the notion: Maybe sportsmen should be asking not whether to allow them, but exactly when to allow them.