Getting Wild in Winter

Round out the season with some wooly outdoor adventure. 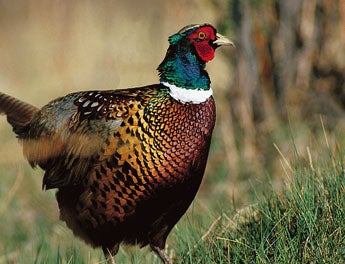 A couple of Decembers ago, my wife’s sister and her son came up north from New York for the holidays, smack-dab in the middle of a freakishly frigid winter gale. It was cold outside even by northern Michigan standards. Every bit of standing water was frozen. A layer of snow coated the landscape and made everything look like candy: the little red barns and farmhouses, and especially the evergreen trees.

The house smelled of the pine and cinnamon sticks I set to simmer on the woodstove. We drank wine and ate dinners of venison and duck. It was all good until somebody broke out the Garrison Keillor tapes while we were stringing popcorn and cranberries. That’s when I switched from a mug of warm cider to a highball of holiday cheer. I can only take so much of Keillor’s breathy, deathbed intonation. A couple of hours of that and I was ready to do anything-even go icefishing.

Actually, it was my nephew’s idea. I don’t particularly like icefishing. There are over 11,000 inland lakes and ponds in Michigan, yet there always seems to be a crowd. The latest rumor had the walleyes in shallow, and we found the drop-off predictably packed.

I suggested to the boy that we strap on some snowshoes and hit a little backwoods pond I know. There, a mile in, we hacked a couple of windows through the ice. Within an hour we had jigged up enough bluegills for a proper shore lunch that I fried right there on the ice. The fish was accompanied by baked beans, which smelled heavenly in the frigid air, bubbling like lava in my favorite cast-iron pan.

Late-Season Ringnecks
“Got winter woes? Hit the holiday road.” That’s my motto if you’re not lucky enough to have late-season grouse, pheasants or deer close to home, or a little farm or beaver pond to drop an icy line in.

According to Pheasants Forever, Nebraska **had the best overall increase in pheasant numbers this year (28 percent). A cool, wet spring hurt pheasants in **Iowa **and **Minnesota, states that reported 34 and 47 percent drops, respectively. South Dakota experienced its best season in 40 years last year, with an estimated 1.8 million roosters taken.

It’s hard to go wrong with a late- season hunt here. Imagine hours thrashing around in cattail bottoms, gnarly creek beds and tangled CRP and shelterbelts-all for the payoff of seeing roosters going up in clouds against a sky as gray as lead. When the weather turns foul, Bill Dillon’s Big Spur Lodge just outside the southeastern town of Armour, S.Dak., offers 14,000 acres of wild bird hunting at a reasonable price (www.bigspur.com).

Another destination I’m considering a trip to this year is either Ohio or **Indiana **for deer. Finding land to hunt here no longer is tough. The Ohio DNR Web site has a list of paper, electric and mining companies that have opened their lands to hunting (www.dnr .state.oh.us).

In Indiana, public lands are listed by county at the DNR’s Web site (www.in.gov/dnr). A few local deer-hunting friends suggest the 192,000-acre Hoosier National Forest in Brown County near the town of Wayne.

Winter Wildcats
Without a doubt, one of the most exciting and physically demanding winter adventures is a December or January bobcat hunt. Northern Minnesota, Wisconsin **and the **Upper Peninsula of Michigan are home to the biggest Midwest toms, weighing up to 45 pounds.

My trip in January will be my third attempt to take a mature tom with a longbow. Three years trying and I’ve yet to see a cat treed. Bobcat hunting is like that. Unless you’re lucky enough to jump one off a fresh deer kill, your best shot tends to be at shotgun range as the cat slinks back through dense cover ahead of the dogs.

Two years ago, hunting the eastern Upper Peninsula with Sault Ste. Marie native John Cryderman, we cold-trailed a cat through dense jjack pines and deep snow for four miles before unleashing the hounds. Cut to a two-mile cross-country sprint through a treacherous series of blowdowns and rocky limestone hills. The cat disappeared into a cave and Cryderman called it a day, but not before I nearly broke an ankle after punching through snow up to my waist, my snowshoe jammed deep into a snow-covered fissure.

Rates for this kind of fun are anywhere from $250 to $500 per day. Since Wisconsin doesn’t allow nonresident bobcat hunting, that only leaves Minnesota and-my vote-Michigan, where a fur-harvester license is available to nonresidents over the counter. In the Upper Peninsula, the limit is three cats per hunter.