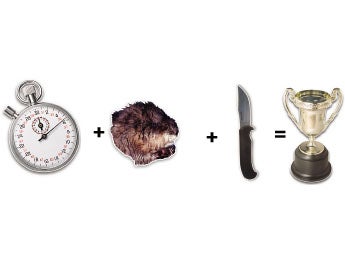 The rules are simple. Contestants provide their own muskrats. After a going-over by the judges to confirm the ‘rats are free of any nicks and cuts that might give a competitor that hundredth-of-a-second edge, the skinners take their places. Each waits, poised over his or her own little furry pile of ‘rats (five each for the men and three each for the women) until the whistle sounds. Then, in a little over a minute-faster than you can peel off a pair of sweaty tube socks-the job is done and a champion is declared.

To hear Cindy Paul (a contest organizer and four-time women’s champion, from 1993 to 1996) describe this annual event, the National Muskrat Skinning Championship is like the Great Outdoor Games without the glitz. The contest has endured since 1938. Every February, trappers, river rats and salty watermen from the Louisiana bayous to Maryland’s Eastern Shore gather in a tiny middle-school gymnasium in Golden Hill, Md., for three days’ competition in duck and goose calling, decoy carving, trap setting, oyster shucking, log sawing and pole skinning.

“To have a realistic shot at winning the skinning contest, men practice to skin five ‘rats in under a minute.” says Paul. “Women aim to do three in under two.”

Every sport has its legends, and in skinning circles the name is Abbott. The Abbot men and women have collectively dominated the competition for three generations. They even pioneered their own skinning method-the Abbott Method.

Since regulations say each hide must have at least one eye and a nose attached, you start with the delicate face work first. Paul has a hard time describing how to do it from there. Picture the knife moving in a blur, the skinner working with the speed and precision of a sushi chef. Then a little razzmatazz with the hands. Ten seconds. Fifteen, tops.

“It’s amazing to watch,” says Paul. “Basically, in a couple of seconds you pretty much turn the muskrat inside out.”