It's another peaceful autumn night on the water....until a 30-pound chinook grabs your streamer and all hell breaks loose. 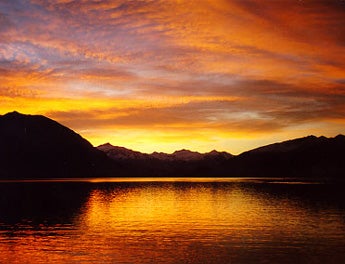 One night, drawn by the promise of doing epic battle with huge fish, you find yourself alone, standing chest-deep on a sandbar in the middle of Lake Michigan. The midnight water is inky black, sinister looking and smooth. An hour spent casting-stripping and double-hauling-comes to nothing. Then, without warning, something brushes up against your leg. The very same instant, the water begins to churn with hundreds of tails and shadowy serpentlike humps. Something out there slams your streamer so hard it nearly wrenches the rod from your hand.

You never believed in sea monsters before. Now it feels like you’re attached to one. But instead of heading to the bottom the fish takes a surging leap skyward toward the moon, the knot connecting fly line to backing shoots through the metal guides with a rapid-fire tick-tick-tick-tick-tick. Screwing down the drag as far as it will go only makes the fish pull harder. In a moment, you actually have to consider the unthinkable: palming the reel and intentionally snapping off the fish of a lifetime or just holding on until it spools you clean.

Reel-punishing Runs
It’s the new frontier of Great Lakes salmon fishing: fly-casting in the surf. It happens in early September at the mouth of any small stream or river where Great Lakes chinook and coho salmon spawn. Those massive schools of fish accessible only to big-tackle anglers most of the year eventually find themselves lured by instinct so close to shore that it takes only a double-haul to reach them.

Drawing a finer definition of what qualities make for the perfect surf-casting setup, author and guide Matt Supinski of Newago, Mich., first seeks what he calls “downed-river mouths.” That is, a river or stream in an extremely low phase where water barely trickles over the mouth, carrying the chemical signal that spawning salmon recognize to identify their natal waters. Add a good onshore wind that moves warm lake water out while drawing an undertow of cold offshore water in and, come nightfall, you’ve got a perfect staging situation.

**Night Moves **
Early September surf-casting for salmon can be productive from dusk to dawn, especially when skies are overcast.

“Hit the conditions right and be prepared for a jolting strike and an aerial battle like you’ve never seen,” says Supinski, who favors a 9½-foot rod with plenty of spine. Streamers should be 4 to 5 inches long and tied with a generous amount of glow-in-the-dark Flashabou so that after you hit them with a flashlight, they really shine. Reels should be rigged with sinking-tip or shooting-head line and, most important, accommodate a couple hundred yards of backing. Hook up with salmon out here and you will get into it every time.