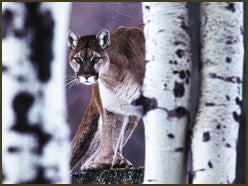 How do you catch a cougar in a Ziploc bag? It may sound like a joke, but in a roundabout way that’s exactly what the Michigan Wildlife Habitat Foundation, a privately funded conservation group, did to get the scientific proof that cougars exist in a state where wildlife officials believe the big cats have been absent since 1906.

The evidence-cougar DNA extracted from multiple scat (fecal) samples collected and bagged in the Upper Peninsula’s Schoolcraft, Mackinac and Houghton counties-likely came from several animals. Which is surprising for two reasons: Not only does it suggest that big cats again prowl the North Woods, but it also flies in the face of a long-standing contention of the Michigan Department of Natural Resources (DNR) that past physical evidence (e.g., sightings, plaster casts of tracks) presented by private citizens could be attributed to misidentification or, in the case of some amazing video footage and photographs, illegally released pets. (Michigan has outlawed the private ownership of cougars since 1989.)

“Since it’s extremely unlikely that a bunch of people all decided to dump their pet cougars in our study areas, the evidence seems to suggest we have a breeding population here,” says Patrick Rusz, the Habitat Foundation’s director of wildlife programs and the man who led the Michigan search.

Rusz has another bombshell for state officials who are reluctant to admit to the presence of cougars: They live in the Lower Peninsula, too. Scat samples sent to the Wyoming Game and Fish Lab in Laramie, Wyo., which does work on behalf of wildlife officials to help prosecute poachers through DNA analysis, indicate that cougars roam Michigan’s lower half as well. Along with the DNA evidence, Rusz has gathered an impressive number of accounts from eyewitnesses in the Lower Peninsula who have encountered the reclusive cats.

One example: A video shot by a woman in Mesick shows a long-tailed tawny feline that measures about 30 inches at the shoulder skulking through the snow. As Rusz says, this is clearly not the barnyard kitty that some DNR employees had first suggested she had seen.