Fishing for a spot at the wrong end of the record books. 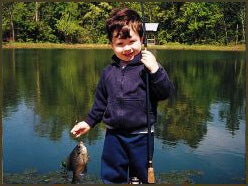 Meet John Maxwell, Indiana Department of Natural Resources (IDNR) officer and a fisherman on a mission. For the past two years, Maxwell has been chasing a legend through the muck and mire, a quest that’s taken him knee-deep into the creepy-crawliest, most uncivilized swamps of the Patoka River in southern Indiana. The creature, a fish called a “flier sunfish,” swims somewhere out there in any one of over a hundred backwater sloughs.

“It’s the Eastern panther of panfish,” says Maxwell, “sort of a cross between a sunfish and Sasquatch.” It also happens to be the smallest species of fish listed in the Indiana state-record book, an incredibly bizarre benchmark of 3.5 ounces (approximately the heft of a pack of Red Man chewing tobacco) that for the last 20 years has gone unchallenged by common men.

One slow day at the office, Maxwell was at his computer trying to look busy when he came across the pint-size record squeezed in there between listings for a 79-pound flathead catfish and a 30-pound freshwater drum. Like most anglers who’ve accidentally caught this queer-looking sunfish-called a “flier” on account of its propensity for going airborne after insects-current record-holder Harold Otte didn’t even know what he had that lazy afternoon in 1983.

The creek below Starve Hollow Dam had always been a good spot for bluegills and crappies and so it was with succulent visions of a crispy panfish fillet dinner that Otte tossed the 7-inch specimen into his pickle bucket. Heading home, he stopped to have a fish cop identify the peculiar catch. The rest, as they say, is history.

For Maxwell, a click of the computer mouse and a couple of phone calls revealed that Harold Otte’s son had done battle with and lost a much bigger flier that day. Maxwell’s biologist friends also confirmed that, yes, while uncommon, occasionally big fliers did turn up during the department’s annual fish surveys in the southern part of the state.

“Toppling the record seemed a cinch,” says Maxwell. With a wealth of insider knowledge that included coordinates of known flier haunts pinpointed on a map, Maxwell launched Flier Expedition 2002 together with a ragtag group of IDNR cronies.

“We brought along spin gear and fly rods, plastic lures, topwater poppers and worms,” says Maxwell. “We ended up catching every species of fish in Indiana-except the elusive flier.”

Maxwell and the crew returned home sunburned and mosquito- bitten, defeated but undaunted. Plans already have been made to return to Starve Hollow Dam, the hallowed waters where all this flier hysteria began. Calling it the 20th Anniversary Flier Expedition, Maxwell again has his eye on the record books.

“I’m looking for a five-ouncer,” says Maxwell. “Five ounces of fin and fight.” He talks about how, if he shuts his eyes, on nights when it’s quiet he can almost envision that divine moment of destiny. “A perfect cast, a subtle twitch of the line and the fish hurtling through the glistening waves after my rubber spider,” he says. That’s how he pictures it, coming home a dragon slayer: Maxwell the Triumphant.

“Figure talk-show appearances, magazine interviews, perhaps an early retirement after that,” he says. “Oh yes, I’m also thinking maybe there will be a parade.” -Bob Butz