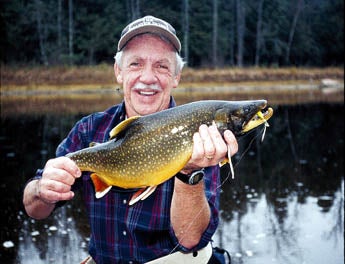 When my buddy Bob Gregg called me with a challenge, I thought he was putting me on. If I’d fish hard with him for two days, he said, he guaranteed I’d catch a 4-pound brook trout.

What made his offer so astounding is that we weren’t going to drive to the wilds of Canada or hike for miles to an isolated lake. We’d be fishing within easy walking distance of paved roads.

So I accepted. And within 20 minutes of fishing, I’d accomplished my mission, bringing to hand a gorgeous, hook-jawed speckled trout weighing in the 6-pound range.

Gregg’s secret? He’s one of very few anglers who take advantage of coasters-brook trout that spend the bulk of their lives in the Great Lakes, but run upstream to spawn in the fall.

Gregg fishes the streams of Michigan’s Upper Peninsula in late fall, after the peak of the salmon run and after the bulk of the brown trout and some of the steelhead have hit the rivers. He concentrates on the deep pools, even when other species are on the gravel.

“I’ve never seen these brookies on gravel. In fact, only once have I ever seen one moving in shallow water,” he says. “They must do all their moving at night. They make spawning beds at the tail end of pools at least five feet deep, but the deeper the better.”

Find Them Deep
Gregg fishes almost exclusively with spinners when he targets coasters. He likes heavy, big-bladed baits that he can get down to the bottom. He generally casts quartering upstream and retrieves as slowly as he can while keeping the blade turning, bumping bottom if possible. He uses heavy spinning gear with heavy line because it isn’t unusual to hook into a late-running king salmon over the course of a day’s fishing.

“Ninety percent of the fish I catch are males,” says Gregg. “They’re more aggressive during the spawn than the females.” Gregg has a 7-pound 6-ounce female brook trout on his wall, though. But the bulk of the big fish-including his personal best, an 8-pounder-have been bulls.

“These are the biggest brook trout I’ve ever seen,” says Gregg, who regularly fishes Labrador and northern Quebec, where he catches 4- and 5-pounders.

Heads Down
Coaster fishing starts in early November and peaks during the last half of the month, during Michigan’s firearms deer season, Gregg says.

“I usually wear blaze orange when I fish because the only other people out there are hunters,” he says. Coaster fishing can be slow. Gregg averages about one brook trout a day and has never caught more than three on any given outing. But he also catches other trout and salmon- including a fair number of splake (brook trout/lake trout hybrids)-and occasionally some hefty pike that drift in from the big lakes.

Saving Superior’s Coasters
Lake Superior produced the world-record brook trout in 1915 and the Nipigon Bay/ Nipigon River area of the lake is legendary for big coasters. But those stocks have fallen on hard times and the Great Lakes Fishery Commission-a consortium of federal, state, provincial and tribal fish-management agencies-is working to rehabilitate the fishery.

Ontario, which recognized the problem years ago, has instituted a one-fish daily creel limit with a minimum length of 20 inches in the Nipigon area and plans to implement a one-fish, 22-inch minimum length rule that would apply to all of Lake Superior and its tributaries. In addition, a water management plan is in place to make sure hydroelectric dams operate in a manner that will maximize brook trout reproduction.