Plug in to River Trout

When big trout are your target, use a big bait 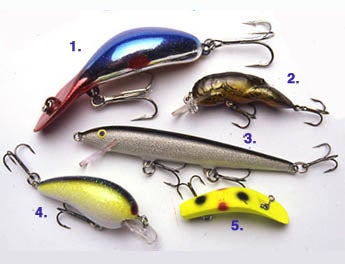 I saw the fish dart out from under the deadfall before it struck, but it happened too quickly for me to react. That’s a good thing. The only possible reaction I could have had-once I saw the size of the fish-would have been to stop my retrieve. And that would have been the exact wrong thing to do. Instead, I felt the bait stop dead in the water, so I set the hook and became one with a thick-bodied, 20-inch-plus brown trout. I was fishing on one of Michigan’s most popular trout streams, on a stretch that had no doubt seen a whole bait shop’s worth of night crawlers, dry flies, streamers and spinners over the previous month. But there’s a good chance the fish I caught was completely unfamiliar with the 5-inch-long floating/diving balsa wood minnow I had just presented.

Not Your First Choice?
Start ticking off popular trout offerings and you’ll be well down the list before you arrive at plugs. Yet except for those times when the fly hatches are so thick the fish merely have to open their mouths to feed, there are few offerings more dependable for catching trout-especially big trout-than plugs.

Plugs offer anglers the opportunity to show trout something that’s worth their while to chase. Many big trout come out of their hiding places to feed only at night. They’re not going to show themselves-or use the energy it takes to chase down prey-unless the reward is commensurate with the effort. And frankly, trout don’t get to be bragging size by eating only midges. Big fish eat smaller fish, and nothing imitates smaller fish better than plugs.

The pattern is simple. Move along (upstream if you’re wading, downstream if you’re floating), throwing at the bank, making casts anywhere from quartering in front of you to perpendicular with the bank. Cast at anything that looks fishy-logjams, brush piles, boulders, dark holes. Try particularly good-looking water more than once. And stay with the cast; the strike can come anywhere from right against the bank to right at the rod tip.

Floating/diving crankbaits are more versatile than sinking models. You can cast them upstream of objects (such as sweepers) that prevent you from getting to the bank, then allow the bait to float downstream before you begin your retrieve. And when you bang into underwater snags, you have a better chance of retrieving a floating lure than one that sinks. Make no mistake-if you’re fishing properly, you will hang up.

For that reason, I prefer at least 10-pound-test and the no-stretch superlines. I like a rod with enough tip action that the relatively light baits can load it for casting, but one with enough backbone to haul a 5-pounder out of a brush pile: something between a stiff worm rod and a spinnerbait rod.

You’ll find the biggest fish tucked away in the kinds of places where you can’t roll a spawn bag along the bottom or drift a dry fly across the top.

There may be times-during a heavy hatch, for instance, or when the water is high and roily-when other offerings will out-produce crankbaits. For consistent big-trout action, it’s hard to argue against plugging into trout.