Paradise on the Flats

The best sight-casting for stripers is on the shoals along the connecticut shore. Who knew? 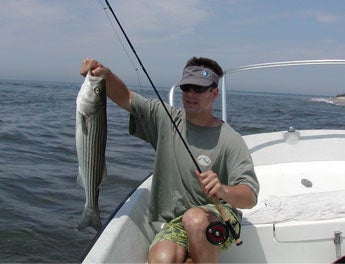 he salt spray was collecting in a crusty layer that burned, pushing deep into every facial crevice as the boat pounded into a building 20 mph wind. The seas finally moderated as we slipped into the leeward side of Fishers Island, along the Connecticut shore in eastern Long Island Sound. As tears flushed the sting out of my eyes, I immediately focused on the half-dozen flocks of working birds spread out over the Stonington Flats, from Napatree Point to the outer break wall that protects Stonington Harbor. Licking the salt off my lips for the umpteenth time, I turned the bow of the boat into the wind and straight toward the largest concentration of birds.

The omnipresent terns spiraled up into the air, shrieked, hovered and then dropped into the water briefly before flapping away with a meal. A classic surface blitz. Under the terns were sporadic explosions that indicated the presence of some magnum-sized striped bass.

I cast a Slug-Go that was engulfed as it sank. The striper caused an upwelling that looked like someone had just engaged a large propeller. My son Jared’s fish announced itself with a short burst of line off his spool at the hookset. Our “got one” proclamations were simultaneous, followed by a duet of singing drags, as the pair of obviously huge stripers began heading back toward the nasty waters of the open Atlantic. Unfortunately, they both got there in a perfectly choreographed escape.

The next run through those birds was the same story. Two casts, two humongous and immediate hits, followed by powerful, steady runs with the tide, ending in a double long-line release. Jared’s second fish straightened the hook on his light-wire jighead; mine simply pulled free. Both times we had been outgunned by monster fish.

Excited and frustrated, we swung the boat back for round three and finally hooked a couple of bass we could handle, a pair of mere 30-inchers that made a fair account of themselves in the deteriorating wind conditions. Even though the birds were still working, we were forced to retreat from the winds that were ratcheting up steadily with every passing minute. As we left the now very riled 10- to 15-foot-deep flats and turned into the protection of Sandy Point (a barrier island that separates Little Narragansett Bay from Long Island Sound), more birds were working the shallow channel that leads east to the Pawcatuck River. [pagebreak] As the Seasons Change
Those first four fish were off the charts, compared to even the largest fish we normally play around with during the summer with our light tackle rigs. Long ago my heavy boat rods and surf sticks were retired in favor of fast and nimble yet powerful (6- to 7- foot) medium-heavy freshwater tackle, a move facilitated by the advent of superlines. The light tackle is up to the job almost all the time, providing maximum angling enjoyment and incredible sensitivity that will ultimately catch more fish over time. In some instances, particularly early in the season, striped bass can be seen sunning in very shallow water. As with bonefish in the Florida Keys, all you see are their shadows. Such fish are always difficult to approach. New England waters are far from crystal clear most of the time. The best way to locate feeding fish in the shallows is to look for diving birds or breaking bait or to work shallow-water structure such as inflowing waters, channel edges, holes, eddies, rocks, docks or anything solid that could attract a feeding rockfish or chopper blue.

Anglers will encounter a mixed bag of stripers and bluefish over many of the shallow flats that are sprinkled around the perimeter of Long Island Sound. Most are classic shoals of sand and silt deposited along the channels in the lower reaches and off the mouths of the area’s larger rivers.

The nature of these shallow-water fisheries will change dramatically from the springlike conditions of early June to the languid summeer doldrums of July. During the early part of summer there will be a good deal of shallow-water activity from stripers of all sizes, ranging from schoolies to the behemoth herring-munchers who clobbered the offerings of my son and me. These are fish that are moving out into the ocean from large rivers and bays, where they have been chasing herring or working the worm spawns that take place from May into early June.

Later in the summer, the larger stripers become scarce, though the schoolies will linger in the shallows. They’re often joined by bluefish and fluke, which will move into and out of shallow areas with the tides. After dark, striped bass will often move back inshore from deeper areas to feed. At this time they are vulnerable to anglers fishing live eels, live hickory shad or chunk baits or casting lures from small boats or bridges.

Getting to the Fish Unfortunately, shore-based access to most of these flats is very limited, though boat access is good along much of the Connecticut coast. There is a free state launch located in all the major rivers entering the Sound. Fishing in the river shallows and flats of Connecticut does not require much of a boat-that’s the beauty of it. I did it for over a decade very successfully in a 14-foot Lund aluminum. In recent years, a growing number of kayakers are using their light and maneuverable craft to seek adventure sight-casting to untapped pockets of fish on the shallow flats and hidden spots along the Connecticut coast.