Hunters face off over whether to bait deer. 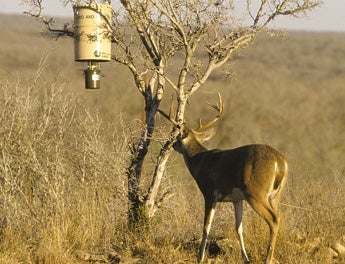 To bait or not to bait deer? Apparently, that’s the eternal question. “Many states have an ongoing debate on baiting,” says Brian Murphy, executive director of the Quality Deer Management Association. That includes Mississippi and Georgia, where the argument to allow deer baiting “crops” up almost every year.

Alabama is the latest to enter the fray. In February, a deer-baiting bill passed the Alabama House Committee for Agriculture and Forestry, drew a lot of controversy and died in the legislature. Gary Moody, chief of the wildlife section of the Department of Conservation and Natural Resources, was a detractor. “There are numerous instances of feeding and baiting causing disease transmission,” says Moody, “and many don’t necessarily think it’s fair.”

Using emergency powers, the Wisconsin DNR banned deer baiting following the discovery of chronic wasting disease in February 2002. Deer hunters in the northern forests bait extensively, and they complained loudly after the ban. In 2003 the Wisconsin legislature amended the ban to 24 counties that had CWD or bordered a CWD county. The DNR accepted the compromise following political pressure. Obviously the debate about baiting won’t be resolved anytime soon.