Canada Conflict: Having a Cow

Until an Alberta cattle ban is lifted, U.S. hunters may not be welcome. 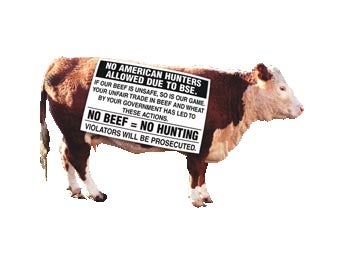 Canadian Rick Paskal is darned unhappy with Americans. “We’re ticked off at you people!” he says. “So, absolutely, American hunters are not welcome on any of my land!”

What’s got this feedlot owner from Picture Butte, Alberta, so riled? In 2003 Canada discovered a single Alberta cow infected with mad cow disease. [BRACKET “At press time another had been discovered.”] The U.S. Department of Agriculture closed American borders to Canadian cattle, costing the beef industry there billions. So guys like Paskal are hitting back, hoping that by denying access, they’ll motivate sportsmen to pressure U.S. politicians to lift the ban. Paskal has allowed U.S. sportsmen to hunt his land in the past. But as the signs he posted now explain, “No Beef = No Hunting.”