Hunting in the City

Great hunting is a lot closer than you think. 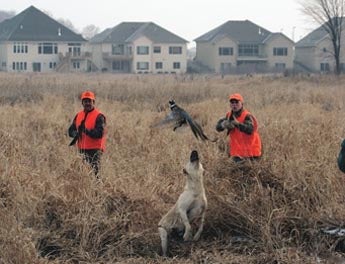 Urban archery deer hunts have received attention by the outdoor press as a great way to hunt near home and reduce potential conflicts between people and animals. But if you’d rather hunt with a gun or chase something other than deer, there are a number of other urban opportunities as well. You just have to know where to look.

“Deer, pheasants, ducks, Canada geese, you bet,” says Paul Schutte, ticking off the huntable species in Corcoran, Minn., a small city within sight of the Twin Cities that has always allowed gun hunting. Schutte, a hunter who happens to be the town’s chief of police, however, did have to push for changes to hunting regulations a few years ago.

“The changes had to be made, to ensure that growing safety issues were addressed,” he says. Those included some close calls during deer drives. In response, the Corcoran City Council made deer hunting with firearms legal only from elevated stands.

“I told the hunters, it’s either that or you won’t have hunting at all,” Schutte says. “It’s worked.”

In Washington, Ga., officials recently waived the ordinance against discharging firearms to allow squirrel hunting within city limits, where gray squirrels are wreaking havoc. “They’re damaging power lines, blowing up transformers and getting into attics,” says Washington Chief of Police Mike Davis, who had issued 15 in-city squirrel-hunting permits by the end of October.

“A lot of the people in Washington have hunted and been outdoors folks all their lives,” Chief Davis says. “They know all about gun safety, though we still give them a talk about it when they get their permits.” Below are some prime towns where hunting is part of people’s everyday lives.

** *Washington, Georgia**
Hunt Location: Virtually anywhere you can get landowner permission and safely shoot
Species: Gray squirrels
Dates: Aug. 15-Feb. 28*
Special Regs: Can use only single-shot shotguns with No. 6 shot. Hunting hours are from 8:15 to noon, Monday, Wednesday and Friday mornings. Requires $3 permit and a firearms safety talk by Chief of Police Mike Davis.
Note: Before the in-town squirrel hunt was authorized, Washington tried trapping. “It was just a bridge too far,” says Davis. “Not enough traps and too manpower-intensive.”

***Tennessee **
Hunt Location: Potentially every city
Species: All
Dates: Vary
Special Regs: No discharge of firearms if it threatens people, although Tennessee landowners (with hunting licenses) can harvest game on their property even within city limits where firearms discharge is otherwise illegal.
Note: In 2004, the state legislature unsuccessfully tried to stop in-city hunting by restricting the dischharge of firearms within city limits. The effort failed when it was determined by the attorney general that restrictions couldn’t be passed simply to stop hunting-there had to be a demonstrable threat to public safety.