How bowhunters pursued venison 5,000 years ago. 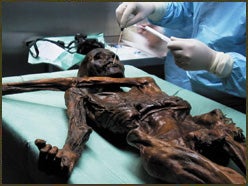 The archer creeps among the boulders toward the deer, stops and draws back his bow, aims for the animal’s left shoulder and releases the arrow. The deer bolts away between some rocks but the hunter knows it won’t go far. He sits back and waits, heart racing from the adrenaline, glad he’ll eat venison with tonight’s dinner.

Just your typical, everyday bowhunter? No. He’s the Tyrolean Iceman, a frozen, mummified hunter who lived some 5,000 years ago and whose mummified body was found in the Italian Alps more over decade ago. Not only was the Iceman’s body intact, but archeologists discovered with it a yew bow, a quiver of arrows, an arrow-point sharpening tool and other items that showed how important hunting was to this man. Recent X-rays have also revealed that he died from a stone arrowhead buried in his left shoulder.

In England, the 4,300-year-old grave of another archer was exhumed in May 2002; together these two men present a fascinating glimpse into ancient life and hunting.

Found near Stonehenge, England, the Amesbury Archer was buried with many stone arrowheads, a forearm guard made of slate, an arrow-point sharpener and three copper-bladed knives. According to Dr. Andrew Fitzpatrick of Wessex Archeology, the fact that the Amesbury Archer was ceremoniously buried with so much equipment (though minus his bow) suggests the high standing of archers in his society, both as hunters and protectors.

The Iceman has been kept frozen since his 1991 discovery but was defrosted briefly in September 2002, when Professor Franco Rollo of the University of Camerino, Italy, took samples from his intestinal tract.

Genetic analysis showed that his last two meals included venison and ibex, a wild goat once common to the Alps, suggesting that much of the Iceman’s protein came from big game.

Bows from the Iceman and Archer’s times were usually handmade from a single piece of yew, a tough, elastic evergreen. Modern re-creations of these are powerful and accurate to 50 meters. While the Iceman was only about 5 feet, 2 inches tall, says Kathleen Gordon of the Smithsonian Institute, who is creating an exhibition around him, his bow was nearly 6 feet long. That length provided ample killing power on quarry of many sizes, as the Iceman discovered firsthand, his left shoulder blade having been completely pierced by a flint arrowhead two thirds of an inch across.

Rollo notes that ancient bowhunters intentionally aimed for the left shoulder, believing that it offered the best chance to bring down prey. So the Iceman’s wound, Rollo says, indicates he was probably killed by rival big-game hunters. The Amesbury Archer was more fortunate: He apparently died from natural causes.