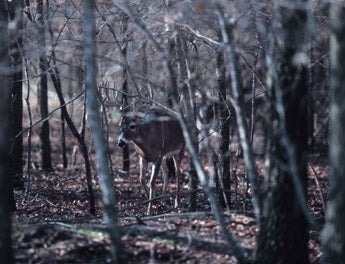 Mountainous terrain, a common sight in the Northeast, presents a challenge for hunters looking to hang a tree stand. The steep hillsides often force hunters (unwillingly, mind you) to the ground. Chris Ellis, of Fayetteville, W.Va., had no choice but to keep out of stands, though, due to injuries he sustained in a car wreck. What was first a disappointing situation has taught Ellis that being earthbound is an excellent way to arrow a deer.

“The two mistakes I made when I first started hunting from a blind are the two most common ones that bowhunters make,” says Ellis, wildlife marketing representative for the West Virginia DNR. “First, a location that may be a satisfactory place to position a tree stand because of wind direction will probably not be as good for a ground blind.

“When you’re in a tree stand and the wind’s not quite right or is swirling about in different directions, you don’t have to pay as close attention to it, because your scent will be carried away. When I first started hunting from the ground, I had deer snorting at me from a hundred yards out, even though the wind wasn’t blowing directly from me to them. It took me a while to figure out that the wind direction had to be perfect before I could even attempt to hunt from a ground spot.”

The second mistake involved the blinds themselves. “I started out either using camo cloth blinds or making what I called ‘log cabins.’ That is, an elaborately constructed blind with lots of limbs woven together and covered with pine or hemlock boughs,” says Ellis. “Not only did bucks avoid these blinds, but so did the does. Deer would look at my blinds and snort and stamp, even though the wind direction was perfect. They seemed to know that something wasn’t right in there.”

The West Virginian then decided to take the opposite tack in earthbound concealment. He says that modern-day camouflage is so effective at concealing humans they need precious little else, even when bowhunting from the ground. All an archer really needs is something to break up his silhouette [BRACKET “see sidebar, above”]. What happens if the deer aren’t coming out to feed until late in the evening? Ellis admits that developing a game plan for this situation stumped him for several seasons. “I decided to try hunting right in one buck’s bedroom,” recalls Ellis. “Two things are true wherever Eastern bucks bed. The first is that the cover is thick with plants like rhododendron, mountain laurel, autumn olive, grapevines or some sort of briar. The second is that mature trees are rare, so bowhunters don’t have many places to hang stands.”

Hunting the Bedroom
Ellis believes that the best locations to hunt a buck from the ground are the deer’s bedding area or thick cover. “One day after two o’clock, I decided to sneak into the outer edge of a mountain laurel thicket to within about a hundred yards of where I thought an eight-pointer was bedding,” says Ellis. “To keep down the noise and to minimize disturbance, I set up in some laurel that was about ten yards off a faint buck trail. I placed a few sprigs of cut laurel in front of me. I also cut out only a couple of narrow shooting lanes. When the eight-pointer came out that evening, I killed him. There’s no way I would have taken that buck if I had been hunting him from anywhere else but from the ground in his bedroom.”

While on my outing with Ellis, I noticed that he didn’t apply any kind of scent. He doesn’t use any corn or oak cover scent, for instance, because he doesn’t want the deer to look his way. The same goes for doe-in-heat or coon scents. He just washes his clothes with scent-free detergent and keeps them in an airtight compartment.