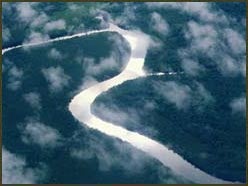 Until recently, blue catfish were uncommon in the Iowa portion of the Missouri River. That changed in 1999, when Pat Lutz of Kanora, Iowa, caught a blue that weighed 74 pounds, 8 ounces. It shattered the state record for the species and established the Missouri River as the nation’s newest hot spot for trophy blues.

Since the flood of 1993, blue cats have flourished in the middle portions of the Missouri. Biologists for the Iowa Department of Natural Resources speculate that many of these fish moved upriver during the extended period of high water and simply never left. Why should they? The habitat is excellent, and there’s plenty of shad and other baitfish for them to eat.

The river also supports an established population of giant flathead catfish in the 40-pound range. Big blues and flatheads love live shad on a bottom-bouncing rig, so you never know which will come to call. The best times to catch them are from 10 p.m. to 3 a.m. Better use stout tackle.

Managed by the U.S. Army Corps of Engineers, the Missouri River boasts generous public access throughout Iowa at various launch facilities, dams and riverside parks. A nonresident fishing license is $22.50, and camping fees at Corps campgrounds range from $8 to $20, depending on services.