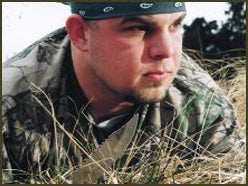 Hog hunters are generally seen as a special breed, but nobody knows quite what to make of Caleb Perry of Fayetteville, Ark.

When Perry, a junior center for the University of Arkansas Razorbacks, hunts hogs, he gives every possible advantage to the pig. His only weapon is a knife.

Despite the risk of injury or worse, Perry has used a 12-inch Bowie knife to kill several trophy hogs, including a 300-pound Russian boar with four-inch tusks.

Perry hunts with guide Bob Owens near Athens, Tex. A typical hunt begins when a pack of baying hounds locates and corners a wild hog. Then Owens releases a fighting dog to distract the hog while Perry jumps into the fray, lifts the animal’s hind legs and delivers the coup de grace.

The outcome is never certain.

During his first hunt, Perry, all 6 feet 4 inches and 290 pounds of him, had to sprint for his life when a 330-pound Russian sow shook off the dog. She almost ran him down, but the dog caught her first, allowing Perry to finish the job.

“I didn’t have time for my life to flash before my eyes,” Perry says. “I guess you risk your life playing football, but it’s nothing like this.”