An hour with the Secretary of the Interior 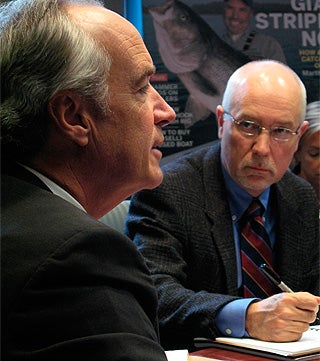 I recently joined the editors of Field & Stream, Saltwater Sportsman, Popular Science and Quad magazine for a one-hour roundtable discussion with Secretary of the Interior Dirk Kempthorne. As I had expected from such a diverse gathering, the questions were varied and interesting. But I also came away with a greater sense of the huge energy challenges we face as a nation and how we must work to figure out how to balance those energy needs with preserving open spaces and wildlife habitat if we hope to leave any kind of outdoor legacy for our grandchildren.

Before our meeting I googled “Secretary of the Interior.” When the U.S. Department of the Interior’s (DOI) home page rolled up, I began to realize just how big a job Dirk Kempthorne has. For openers, the DOI manages more than 500 million acres of public lands-about one-fifth of the land in the United States. Falling under the DOI are the Bureau of Land Management, the Fish and Wildlife Service, the National Park Service, the Bureau of Reclamation and the Bureau of Indian Affairs. The DOI also has responsibility for managing a gigantic number of water resources, oil and gas leases and mining concerns. Closer to home for hunters and fishermen, the DOI is directly responsible for protecting threatened or endangered species and preventing and controlling invasive species.

Before fielding our questions, Kempthorne spoke to us about some of the initiatives he has on his plate, such as the upcoming 100th anniversary of the National Parks Service in 2008 (and the need to secure funding for parks in the 2008 budget). He also explained his strong support of DOI’s Healthy Lands initiative, which addresses the need to balance our nation’s growing demands for oil, gas and other natural resources with protecting fragile environments, adding that he doesn’t think the two are mutually exclusive. And there are also major law-enforcement issues to deal with as the Bureau of Indian Affairs begins its fight against drug cartels that have targeted Indian lands as havens for the illegal drug trade in this country.

As a father, Kempthorne also expressed great interest in the need to use the outdoors as a way to connect our children with nature, with the added benefit that by getting them outside, we can begin to fight growing problems such as childhood diabetes and obesity. This idea meshes perfectly with the broader message I try to instill in non-sportsmen: that hunting and fishing are an ideal way to connect with your kids. (Heck, put a kid and a parent out on a lake in a rowboat for a couple of hours, or have them spend a morning alone together in a duck blind, and sooner or later even the most non-communicative kid is going to talk. And that is a good thing!)

When it came my turn to ask a question, I voiced my concern about a recent article in the Wall Street Journal that noted how billionaire Warren Buffet had recently purchased Burlington Northern Railroad, betting that in the future, ethanol (made from corn) is going to be a major fuel source and that railroads are going to be the key to getting that corn to refineries. Buffet is placing a bet on the future of our energy needs, and that bet may make him yet another fortune. That’s okay-that’s capitalism at its finest-but what happens when Midwestern farmers decide it’s more profitable to plant corn and plow their fields to the edges than it is to preserve pheasants or keep their land under Conservation Reserve Program protection? In response, the Secretary again reminded me of the balance we must strike, as a nation, between energy use, habitat preservation and the need for recreational lands of all types. That’s when I really starting thinking about the obligation each of us has to help wean this country off its addition to oil. There is a lot we can do to help ease our energy needs wherever we live, even in the smallest of ways. We’ve all heard about turning downn our thermostats in winter and using the AC more sparingly in summer, but how many of us actually put that into practice? We can also turn down the hot-water heater and take shorter showers; run the dishwasher only when it’s completely full; make sure the kids turn off the lights whenever they leave a room; and power down the computer at night. And, of course, we should drive the most fuel-efficient cars and trucks available, carpool, use public transportation and even walk or ride a bike to work or to the train station when the weather permits. These things might seem silly-they’re so basic-but if everyone in the United States simply maintained the air pressure in their car’s tires at the proper level, they’d get better gas mileage and we’d save millions of gallons of fuel every year.

Looked at in the larger scheme of things, that might be one less strip mine or one less oil field that needs to be exploited, one more piece of land that might remain as wildlife habitat. And, perhaps, one less headache for Dirk Kempthorne (and the DOI secretaries who follow him) to worry about.