If your adrenaline isn't pumping from shooting the rapids, try hooking into a monster flathead for nonstop action. 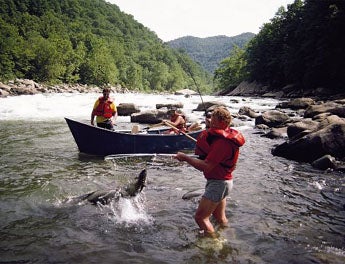 The James River may be one of the best smallmouth rivers in the South, but as Mike Ostrander eases his raft down the shaded bank of this Virginia waterway, we cast tiny grubs in search of sunfish. Ostrander and I score plenty before we reach our first stop, enough to last us the rest of the afternoon. The palm-sized redbreasts are merely a step toward our ultimate goal: big flathead catfish in the whitewater of the river. Not only is the James prime smallmouth country; it’s loaded with catfish with heads as wide as shovels.

We come to a short dam with a narrow chute cut into it that attracts kayakers and other thrill-seekers, but Ostrander digs hard for the far corner of the dam. Instead of running the rapid, we portage around it. My guide isn’t afraid of the roller-coaster water that crashes against mid-current boulders and pours into swirling pockets; he’s more concerned about the welfare of his fishing tackle and, if he has any, his clients. Besides, the real fun lies under the river’s roiling surface. He’d rather save his tackle and catch a fish than shoot the rapids and risk dumping his rods.

“Catfish will move right into that fast water if they are feeding, but they tend to avoid shallow water during the daylight hours. If they have enough depth, you can catch them in rapids if you can get a bait down to them, which is pretty difficult. I focus on the slower water because it’s so much easier to fish,” explains Ostrander, who specializes in tidal and upper James River catfish.

Look for the holes
Virtually every Southern smallmouth river has flathead, blue or channel catfish, but only a handful of anglers bother with them. Mostly, you’ll see the remnants of campfires and forked sticks poked into a muddy bank close to a road, a sure sign that someone has been fishing for cats while the rest of us were in bed. Those campfire catfishermen tend to leave their success to the roll of the dice.

Either a fish comes by or it doesn’t. Surprising when you couple a float down a rapid-laced river with the powerful fight of a big flathead or channel. Anglers like Ostrander who know how to identify prime catfish holes can clean up in the middle of the day simply by going directly to the fish.

“River catfish are pretty predictable. I catch them almost every time I go out. I average about ten per day,” figures Ostrander. “My biggest is thirty-five pounds, but the typical top weight is twenty to twenty-five pounds.”

On this particular day all but a few stops produce fish; the biggest is a bullish 19-pounder that comes from an 8-foot hole protected by an overhead log-prime catfish habitat. Even though that fish was within mere feet of the bank and a busy road, Ostrander says foot-bound anglers are at a general disadvantage when it comes to river access.

“It’s real important to be able to move around. Catfish tend to find a deep hole and stay in one spot throughout the day,” he explains. “If you’re fishing a hole that just doesn’t have any flatheads in it, you’ll be there a long time before they show up. A canoe or raft will help you reach the water that bank anglers just can’t reach. Plus, considering the debris and other obstacles on the river, it’s much easier to fight a large fish from a boat.”

Quick stops
Ostrander tends to give each stop no more than 10 or 15 minutes, although he will wait a little longer if he’s confident he’s fishing good water. Catfish will usually feed if presented with an easy meal. If they don’t bite, they’re likely not there. He typically uses two rods per angler, casting each one at a different angle to cover more area.

His rig is a 1-ounce egg sinker above a barrel swivel and an 18-inch leader tied to an 8/0 circle hook. He uses 30-pound-test Trilene Big Game mono, stout rods and reels with clickers.

Flatheads are aggressive feeders and prefer lively baits.. Four-inch sunfish are ideal (check local regulations), but jumbo shiners and even fresh cut bait will work in a pinch. The key, stresses Ostrander, is to put the bait in front of fish. Odds are, they’ll eat it.

“I catch more channel cats on smaller live bait and blue cats on fresh cut bait,” Ostrander says. He prefers to tail-hook his sunfish. Not only do they stay alive longer, but they swim upward as they struggle to escape the inevitable bite from a monster river catfish.

For more information on fishing the James and other Virginia rivers, contact Mike Ostrander at 804-938-2350.