The skinny on how frequently fishermen lie. 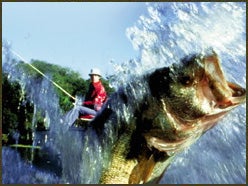 Fish tales have been a part of sportsmen’s lore since Jonah claimed to discover the “self-chumming” technique. A couple of millennia later, scientists have finally quantified the fishing fib-factor. Biologists in Alberta realized they were getting less-than-accurate data from anglers when they interviewed them or had them fill out post-catch surveys. Bad data could potentially mean bad wildlife management decisions, so they set out to uncover exactly how far fishermen stretch the truth. With the use of spies, Michael Sullivan of the Alberta Fish and Wildlife Service recorded actual angler catch rates and then compared them with information given by the fishermen later on.

Sullivan’s study revealed that the fib-factor varies in inverse proportion to angler success. When fishing is good, about one catch per hour, fishermen tell the truth. Fibbing sets in when things go south-the worse the fishing, the bigger the lies. When the average catch rate drops to one fish every 10 hours, anglers report four imaginary fish for every one caught. Time seems to cloud memories: Responses to postal and phone surveys were more fanciful than lakeside reports.