At last, an answer to one of deer hunting's biggest arguments. 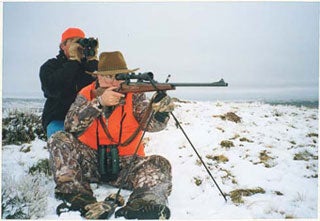 When I first asked Jim Carmichel to compile his list of the 25 best deer rifles of all time, I believe he thought I’d finally lost it.

“What’s the use?” he said. “After all, such a list would be only my opinion.”

“That’s right,” I answered. “It would be your opinion. But I think readers would like to know what your choices are, and I think they’d be even more interested if they knew they could somehow weigh in with their own choices and opinions.”

That’s when I began to rattle off a whole list of possible candidates. There are the obvious ones, of course, like the Model 94 Winchester and the pre-64 Model 70. But what about something earlier? Like the blunderbuss or the Kentucky long rifle? Surely those two guns accounted for untold venison dinners as this continent was being settled. Might the 1898 Mauser also be among the front-runners, or the ’03 Springfield? Moving forward in time, what about the Savage 99? Or the Remington 700? Or Ruger’s M-77?

I finally got Jim to agree to narrow the list down to the 25 that make the most sense to him, and then add a short explanation, based on his opinion, about why each rifle is worthy of inclusion. I’d like to thank Jim for putting up with me during this whole project and for helping to round up so many worthy guns (many borrowed from friends) to photograph.

Although our list probably doesn’t include everyone’s favorites, I believe you’ll find most of the models that have been at the heart of so many campfire discussions over the years. So, which is America’s favorite deer rifle? We’re going to ask you to help us settle this debate once and for all. After you’ve read Jim’s feature, fire up your computer and join us over at outdoorlife.com, where you’ll be able to cast your vote in a special online ballot. We’d also like to hear your comments, so feel free to make your argument for your favorite deer rifle. We’ll tally the votes and share them with readers in an upcoming Shooting column.

What’s my favorite? It’s an old Remington 700 in 7mm Remington Magnum. There’s nothing particularly special about this rifle. It wears its original laminated stock, which makes it pretty heavy for lugging around in the field all day. But it has a really nice trigger and it shoots Federal’s 175-grain Trophy Bonded loads into tiny little groups every time I sit down on the bench. I’ve taken a bunch of deer with it, as well as an elk or two, but the thing I like most about this rifle is its utter reliability. Its stock is battered, and I’ve never replaced the original 3-9X scope I put on it years ago, but I know that when I put the crosshairs on a deer’s vitals, it’s going down.

This fall I’m heading to Montana for mule deer. Hopefully, long about the middle of the month, I’ll slip this rifle from its fleece-lined case and slide silently into the sagebrush in search of one of Montana’s famous trophies. If I’m lucky enough to find one, I know I’ll be carrying a deer rifle that’s up to the job.