People who are positively affecting hunting and fishing 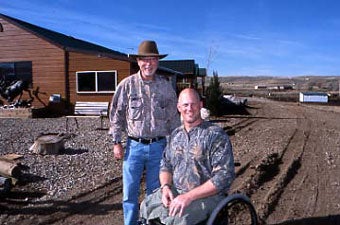 Chad Kueser (right) and OL¿s Todd Smith share a moment in the sun the day after Chad¿s amazing elk hunt, which he accomplished by riding a mule into the high country then using his wheel chair to get into position for a shot. Outdoor Life Online Editor
SHARE

Chad Kueser is just like a lot of us. He has a wife and kids, a job and a passion for hunting. The only difference is that Chad doesn’t have legs anymore. He lost them in a bomb blast when he was stationed in Iraq. But Chad has something I wish I had more ofÂ…courage.

I met Chad on a recent hunt in Colorado where he had come as a guest of TV host Jim Zumbo and Dick Dodds, owner of Elkhorn Outfitters. Jim was filming one of a series of shows in which he takes veterans who have been wounded in the line of duty hunting. (Look for this show on Jim Zumbo Outdoors on the Outdoor Channel next spring.)

It’s funny how people react when they’re placed in a room with someone like Chad. They shake hands and are quietly respectful, but they don’t quite know what to say. Chad just smiled and popped a Corona. He was just there to hunt elk and have fun. It was the rest of us that needed to lighten up.

I supposed he would hunt out of a truck, but as with every supposition I made about Chad, I was dead wrong. Chad wanted to get on a mule, ride up into the high country and take his elk like the rest of us. But how do you get a man without any legs to sit a horse?

Cowboys love challenges and it didn’t take guide Jim McCoy long to figure out a solution. The next morning, Jim rolled out his invention. He had taken a saddle and, using angle iron, welded up a set of handlebars together to fit it. All Chad would have to do is grab the reins and hang on. It was cowboy ingenuity at its best and Jim did it in an entirely unassuming way.

That afternoon, Chad headed up the mountain with two guides, his wheelchair strapped onto one of the pack animals. Now imagine yourself balancing precariously on a mule as you head into the high country. The elk are up ahead mewing and bugling. But to get to them you’re going to have to dismount, then make the rest of your way up the trail in a wheelchair. Chad Kueser has tremendous upper-body strength, but melting snow had turned the trails into a quagmire, making an already difficult situation nearly impossible. I’m told by those who were watching from far away with binoculars that his two guides grabbed hold on each side of the chair and, between the three of them, powered up the trail and into position for a shot.

Back at the lodge, the hours crawled on. It was long past dark when a cell phone call finally came inÂ—Chad’s elk was down and they were on their way back. All around there were smiles and a huge sense of relief, but that paled in comparison to what happened when Chad came back. The front door opened and Chad wheeled in, his face beaming with pride. In a second the entire group was on its feet, giving him a standing ovation. No longer were people awkward. Guys swarmed him, pounding him on the back, raising their cocktail glasses. It was Chad’s elk all the way, but everyone in that room felt a great sense of pride for him. It was hunting pride, the kind we feel when we see a youngster take his first deer. I think it’s also a pride we share as Americans. Here was a man who had overcome great hardship, who had sacrificed so much for his country. And, in the end, all he wanted to do was take his elk like one of the boys. Believe me, there wasn’t a dry eye in the house.

Next day, as hunters began to head home, I watched as each one said goodbye to Chad. He didn’t need to kill an elk to earn anyone’s respect. But taking his elk had made a connection with the hunters gathered there. No longer was he a war hero in a wheelchair whom the guys weren’t quite sure how to approach. He was a hunter, just like them.

As this is written, we’re celebrating Thanksgiving. As I take stock of all the things I’m grateful for, I’m thankful for Chad and the thousands of men and women like him who are out there every day, laying it on the line to protect our freedoms. They do it unselfishly and without hesitation. And that, to me, is what true courage is all about.