Card games, antics and even a little hunting. 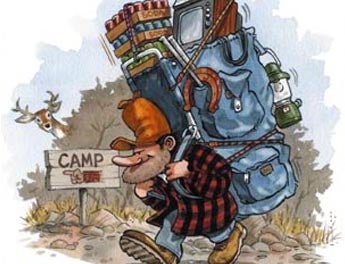 Michigan’s 800,000 deer hunters are blessed with 6 million acres of public land in the Upper Peninsula (UP) where they are allowed to set up temporary quarters during deer season. The result is an annual migration of RVs, makeshift camps and instant cabins and a lot of hairy tradition, all of which revolves around the November 15 deer-season opener.

In the northern Michigan town of Grayling, and in many other towns all over the north country, Opening Day is a school holiday. The tradition has become so entrenched that you can’t listen to the car radio on Opening Day (the capitals are intentional) without hearing what has become the “Jingle Bells” of the event: Da Yoopers singing “The Second Week of Deer Camp.” Sung in the Finnlander accent of the UP, the chorus is, “It’s the second week of deer camp, the best time of the year. We drink, play cards and shoot the bull, but we never shoot no deer.”

The song reflects a stereotype that can be uncomfortably close to reality. For example, one Opening Day morning the boys from the Smokey Lake Deer Camp headed for their stands. When the gang got back to camp that evening, they didn’t find a tent. “All that was there was a square of ashes in the snow where the tent had been,” says Curt Hahn, who lives downstate in Northville, Mich. “The stovepipe had set the tent on fire. The only thing that didn’t burn up was a chili pot I’d borrowed from my wife. One of the guys was so frustrated that he shot the pot. I knew I was in trouble,” Hahn says.

An elaborate camp that’s set up each fall by Jim Goodell, Dave Pankow, Harry Schroeder and Larry Bauer in the Pigeon River Country State Forest is portable. The living quarters are a prefabricated cabin made from plywood, and the crew has become so slick at putting the numbered pieces together that two hours after they arrive they are ensconced in a 16-by-24-foot cabin complete with adjacent outhouse and an American flag flying from a 20-foot pole out front.

Even the rich guys get in on deer camp in the UP. The Turtle Lake Club in the northern Lower Peninsula is a 27,000-acre facility whose 19 members include some of the leading lights of the auto industry. Members hunt from elaborate blinds for deer that used to be fed like cattle at long troughs. The club brought in tractor-trailer loads of beets, corn and other goodies as feed and bait until the Department of Natural Resources banned the practice because of an outbreak of bovine tuberculosis. Hunters at Turtle Lake are taken to their blinds in horse-drawn wagons. The deer are driven to the hunters by locals who walk through the woods squeezing rubber bulbs on horns like those used in antique cars.

It would be hard to find a greater contrast between the old-world, patrician style of Turtle Lake and the laid-back Yooper atmosphere of Z-Camp, a small, rustic cabin owned by Frank Zeits. While its old furniture, oil lamps, bunks and traditional sauna aren’t unusual in the UP, the interior dÃ©cor is. The ceiling of the cabin is covered with nearly 100 racks from whitetails shot at the camp. Next to each rack is a note that details how the deer was killed-the Zeitses claim that some of the stories are even true.

Forty years ago George Woody began hunting with a crew out of an overcrowded army-surplus tent. Today the camp is a collection of modern campers and motor homes and Woody is one of the camp patriarchs. He pointed to an insulated wire in the branches of a tree 20 feet above a campfire and said, “I remember when we first got electricity from a generator 30 years ago, and some of the older guys ran the wire through the tops of little saplings to keep it off the ground. Now look at it,” he said pointing way up. “Most of those guys have passed, but every time I look up and see that wire, I think about them.”