Walleyes and perch on a frozen lake? Puh-leez. Real men don't go panfishing when there are sharks to haul through the ice. 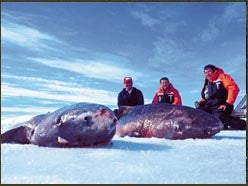 Forget your Daddy’s icefishing. Leave the 5-gallon plastic pail and the snuff can of waxies at home. This is sharkin’, as Captain Quint from the movie Jaws would say–in this case sharkin’ for the elusive Greenland shark (Somniosus microcephalus), a relatively unknown monster of the deep that usually lives below the arctic ice and can grow up to 21 feet long and weigh more than 2,000 pounds. But icesharkin’? That’s right, at least for the hardy souls who will brave the first-ever Greenland Shark Challenge March 11-18, in Uummannaq, Greenland, on the country’s western shore.

Sponsored by the non-profit Greenland Shark Angling Committee, the Challenge will host 20 anglers, all trying to hook the biggest “Greenie,” as the shark is nicknamed. Recommended equipment includes a 50-pound-class stand-up rod, a multiplier reel, a good harness and a rod belt. Locals will chum fishing holes to attract sharks; then contestants will drop a hook baited with whale meat or seal blubber hundreds of feet down. Greenies don’t usually put up a big fight (if they did, you’d never get one), although landing them still takes plenty of muscle.

Warm clothes are a must. March temperatures in Uummannaq average about minus-15 degrees Fahrenheit. In fact, it’s best to bring lots of stuff, as the town, with only 2,800 people (and 3,000 sled dogs), doesn’t actually sell any of the necessary fishing gear. (The Uummannaq hotel, home base for the event, will rent sealskin suits and boots to keep you warm on the ice, however.) Total cost to participate? About 3,450 Euros, or $3,869. That includes travel, accommodations, food and the competition. For more information, go to www.greenland guide.gl/sharkchallenge.

Danish fishing writer Peter Steensen went sharking outside greater Uummannaq last March with two British anglers and a documentary film crew. Steensen and the Brits used Shimano reels outfitted with more than a thousand feet of Siglon Kevlar line “as thin as sewing thread,” according to Steensen, who eventually landed a 467-pound Greenie after a 70-minute struggle. “My biggest shark so far,” he says, “but only a baby. The local fishermen have caught sharks weighing more than six hundred kilos [1,600 pounds] on their halibut lines.”

DON’T GO IN THE WATER

The Greenland shark isn’t entirely unknown to North America. Inuit people of the Northwest Territories tell stories about Greenland sharks lying in wait like crocodiles at the mouths of arctic rivers and then attacking caribou that come to drink. With wide mouths filled with row after row of inch-long teeth, Greenland sharks are known to grab onto their prey and “corkscrew” around and around as their teeth dig ever deeper into their victims.

If you do the Challenge, don’t expect a big shark fry after you haul up Jaws Junior. According to Jeffrey Gallant, a Canadian shark researcher, Greenie flesh contains unusually high concentrations of uric acid, a component of urine. Repeated freezing and thawing of the meat is supposed to make it palatable, “but apparently, it still tastes just like urine,” Gallant notes. Is it any wonder the Challenge encourages catch-and-release? –Brian McCombie

For more information, go to www.outdoorlife.com/newsandfacts