Youngsters hauled in the big 'uns in this year's awards program. 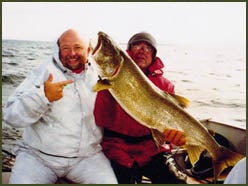 It’s not surprising that so many adults entered eligible fish in OL’s 2003 Fishing Awards Program, but the number of anglers 12 and younger who qualified in the Youth Division is downright amazing. And they didn’t just make it by a cat’s whisker. Some of the youngsters proved they could catch lunkers with the best of them. One example: Jacob Charlton, 6, who entered the biggest crappie of all. His catch, which weighed 2 pounds 3 ounces, was caught from Alberta Creek in Oklahoma on a live minnow. And Ashley Crossland was best overall with her 16-pound 10-ounce walleye, which went after a Rapala crankbait in Lake Erie.

Thomas Prouty of Jefferson, Maine, caught a 7-pound 5-ounce smallmouth last January while icefishing near his home and it held up as the heaviest smallie of 2003. Nordheim, who caught the biggest walleye among adult anglers, waited until November to land his lunker. It was the last species winner entered. It’s interesting to note that, other than natural baits, tried-and-true lures that have been around for many years accounted for a number of the heaviest catches. Familiar names such as Mepps, Dardevle, Flatfish, Kastmaster, Suick and Bomber made the lineup used to catch the lunkers.

Each angler who topped a best-of-species listing was awarded a pewter pin signifying that his or her catch was the heaviest entered for a particular species. There were a number of close finishes in some categories, perhaps indicating that angling skill is not confined to a lucky few and that the nation’s fisheries are generally in good condition.

All eligible entrants in the program received a colorful patch for cap or jacket plus a certificate of participation. Check the list of 2003 winners below. Of the hundreds of entrants who qualified last year, these anglers managed to land the biggest fish in each of the eligible-species categories.

Now the slate is clean and it’s time to start fishing for the 2004 Outdoor Life Fishing Awards Program. [XLINK 589465 “Click Here”] to find out how to enter next year’s contest.

Remember, all entrants who catch eligible fish of the required minimum size will receive a certificate and patch. The pewter pins are harder to come by, reserved for those anglers who weigh in the heaviest fish in each of the eligible species. But you can bet that somebody is going to win the pins this year; why shouldn’t it be you?

Special Thanks to the Following…